Nato calls on Russia to pull troops from Ukraine border 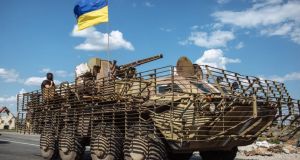 Much of the fighting in eastern Ukraine has been on the border with Russia, which Ukrainian government forces want to safeguard to prevent any influx of fighters and military hardware from Russia. Photograph: Roman Pilipey/EPA 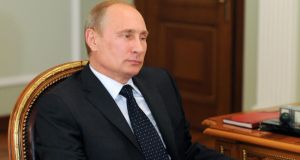 Russian president Vladimir Putin attends his working meeting yesterday. Russia will ban all imports of food from the United States and all fruit and vegetables from Europe. Photograph: Mikhail Klimentiev/EPA/Kremlin Pool

Mr Rasmussen’s visit to Kiev followed a warning by the US-led alliance that Moscow had amassed 20,000 troops near the border and could be planning a ground invasion of Ukraine as it makes progress against the pro-Russian rebels.

The two men discussed the possibility of a proposed Nato trust fund supporting Kiev’s ability in areas including command and control, communications and cyberdefence, the government said in a statement.

Provision of lethal aid to Ukraine by the US-led military alliance did not appear to have been discussed.

The Kiev government announced it was suspending a ceasefire with the rebels at the crash site of the Malaysian airliner that was shot down on July 17th, after an international mission halted recovery work there for security reasons.

Defence spokesman Andriy Lysenko told journalists that government forces had clashed 19 times with separatists in the Russian-speaking east, often coming under artillery and missile fire from within Russian territory.

Regional authorities in Donetsk, the east’s main industrial hub and now the main rebel redoubt, said one person had been killed at a hospital when a shell struck today after a night of intensive artillery attacks overnight.

Government forces, who say they are gradually tightening a noose around the rebels, denied responsibility. “We have accurate information that the Ukrainian military are not shelling those areas,” said Mr Lysenko.

“In the past 24 hours we have lost seven servicemen, and 19 received wounds,” he said.

The new deaths among government forces suggest that Kiev military losses now total more than 400 since the conflict with the pro-Russian separatists erupted in April.

The United Nations High Commissioner for Human Rights says the conflict has cost the lives of more than 1,100 people in all, including government forces, rebels and civilians.

Ukraine and its Western allies accuse Russia of orchestrating the revolt and arming the rebels, who have declared independent “people’s republics” in the two main industrial regions. Moscow denies involvement.

The United States and the European Union have imposed sanctions on Russia, while Moscow has retaliated with a sweeping ban on imports of many Western food stuffs.

Fighting has intensified since the shooting down of flight MH17, killing all 298 people on board, an act the West laid at the door of the rebels. Russia and the rebels blame the disaster on Kiev’s military offensive.

The Netherlands, which lost 196 of its citizens in the incident, said yesterday it was halting the recovery of debris and victims’ belongings because of continued fighting in the area.

The Ukraine government said it would suspend a ceasefire now in the area until an international team of experts were ready to resume recovery work there.

Despite a steady daily loss of lives, government forces have been gaining gradually against the rebels, who are mainly led by Russian citizens and are heavily armed with tanks and artillery and other heavy weaponry that Kiev says has been brought across the border from Russia.

Russia announced military exercises near the border this week, and Western officials fear that Russian president Vladimir Putin could order Russian forces into Ukraine if he sees that the rebels are about to be crushed.

The decision follows a decree signed by Mr Putin ordering the government to ban or limit food imports from countries that imposed sanctions on Moscow for its support of rebels in eastern Ukraine and the annexation of Crimea.

“There is nothing good in sanctions and it wasn’t an easy decision to take, but we had to do it,” Mr Medvedev said.

The ban is valid from today and will last for one year, he said.

The measures will hit consumers at home who rely on cheap imports, and on farmers in the West for whom Russia is a big market.

Moscow is by far the biggest buyer of European fruit and vegetables and the second biggest importer of US poultry.

RIA quoted the spokesman for Russia’s food safety watchdog VPSS, Alexei Alexeenko, as saying all European fruit and vegetables and all produce from the United States would be included in a ban drawn up on the orders of Mr Putin to punish countries that imposed sanctions on Russia.

- poultry and its subproducts, fresh, chilled or frozen

- all salted, dried or smoked meats; - fish, shellfish, scallops and other aquatic invertebrates