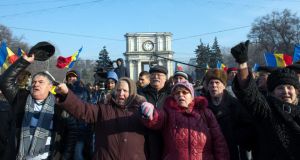 People attending a rally in front of the parliament building in Chisinau, Moldova, on Thursday. Photograph: Dorin Goian/AFP/Getty Images

Thousands of Moldovans rallied in the country’s capital, Chisinau, on Thursday to demand the resignation of a government that was secretly sworn in late the previous night amid rising tension and public anger.

At least 15 people were injured on Wednesday evening as protesters forced their way past riot police and briefly entered parliament, but they failed to prevent president Nicolae Timofti formally appointing a cabinet led by new prime minister Pavel Filip at around midnight.

The clandestine nature of the ceremony only fuelled the anger of Moldovans who accuse their ruling elite of being mired in corruption, and of striking shady deals with wealthy businessmen who wield huge political influence.

About 10,000 people gathered outside parliament on Thursday and then marched through central Chisinau, chanting “Thieves to jail!”, “Crooks and thieves – you’ve got five minutes to leave!” and demanding snap elections.

Leaders of the pro-Russian Socialists and Our Party group led calls to protest, but they were joined by the broadly pro-European Union Dignity and Truth movement, and Moldovans of all political stripes who are disillusioned with their leaders.

Moldova has been in limbo since the last government fell following a vote of no-confidence in October, as the country reeled from a still-unsolved scandal in which $1 billion (€920 million) was stolen from three banks, triggering a financial crisis.

The disappearance of one-eighth of Moldova’s gross domestic product sparked protests, but failed to break the close links between politicians and businessmen in Europe’s poorest state.

The ruling coalition, which says it backs EU integration, urged Mr Timofti this week to name as premier Vladimir Plahotniuc, one of Moldova’s richest men.

A hurried debate and vote in parliament, boycotted by the Socialists, and then the secret, midnight swearing-in ceremony only added to Moldovans’ anger and sense of being excluded from politics by the shady back-room deals of a ruling clique.

Mr Timofti’s spokesman resigned on Thursday, saying he had mistakenly informed journalists that arrangments for the swearing-in ceremony would take place on Thursday, but it failed to calm protesters.

“Yesterday we were cheated, they trampled on democracy, freedoms, human rights and laws,” said Andrei Nastase, a leader of the Dignity and Truth movement.

“All of this is happening because Moldova’s chief oligarch Vlad Plahotniuc usurped the country,” he added.

Mr Nastase addressed the crowd from a stage erected near parliament, alongside two politicians with close ties to Moscow – the leader of Our Party, Renato Usatii and Socialist chief Igor Dodon.

“The whole country is here. The most important thing is that we are together,” Mr Nastase told protesters, many of whom waved the national flag.

The EU and US called for calm and dialogue, but protest leaders vowed to bring more people onto the streets until the government resigned.