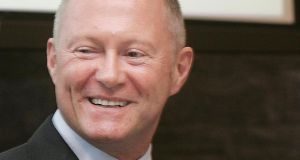 After last year’s departure of Catherine Day as secretary general of the European Commission, there were fears that Ireland’s presence in the upper ranks of the European Union was slipping. But a recent appointment means Ireland is still at the table when it comes to securing senior positions.

Human rights lawyer Michael O’Flaherty has joined a group of prominent Irish figures, including EU Ombudsman Emily O’Reilly and EU ambassador to Washington David O’Sullivan, who have been appointed to senior European posts in recent years.

O’Flaherty is a former professor of human rights at University College Galway and chief commissioner of the Northern Ireland Human Rights Commission. He took up his position as director of the Vienna-based EU Agency for Fundamental Rights in December.

Sitting in a Brussels hotel, O’Flaherty set out his vision for the body, which was established nearly 10 years ago. The agency is an independent body within the EU, charged with providing advice on a range of human rights issues.

“We say: look, this is the law, so how do you experience that in life, in terms of access to your rights and entitlements. That sometimes gives us a very different story.”

He cited anti-Semitism, saying there are “few deliberate, specific acts of discrimination against people because they’re Jewish. But, at the same time, there’s a huge sense within the Jewish community of being marginalised, of being discriminated against, of being pushed to the periphery.”

Similarly, the rights of the LGBT community have been a focus.

“We found out from a recent survey of people who self-identify as LGBT that there is not a single country in Europe, not one, where a same-sex couple is comfortable holding hands in public. Our lazy assumptions would be well, yes, in some countries that’s not a problem, and others, it obviously is. But the survey demonstrated that in every single member state there was an issue.”

It is with the refugee crisis that O’Flaherty said the agency is making real inroads. His first official trip as director was in January, to the islands of Lesbos, Sicily and Lampedusa, the epicentre of the refugee crisis.

The agency now has a team at the Greek reception centres in, advising EU agencies such as Frontex and the European Asylum Support Office on the human rights dimensions of their work.

He cited the example of child protection. “Forty per cent of migrants, as of a few weeks ago, were children. Nobody disputes that they need special, protective responses, but the problem is how to do that.

“Traditionally you appoint a guardian for a child, but what do you do when you’re talking about hundreds and thousands of children – you don’t have enough guardians. The old model of one guardian, one child just doesn’t work.”

Despite its involvement in the refugee crisis, in other areas the agency is constrained by its mandate. Amid increasing concerns that the EU is turning a blind eye to human rights abuses in its recent refugee deal with Turkey, the agency is unable to comment on human rights in Turkey as its remit only extends to EU countries.

Similarly, it does not have a monitoring role, so cannot intervene, in the debate about possible breaches of the rule of law in Poland.

The charter, which underpins EU law, applies to all EU institutions as well as member states when they are acting in an area of EU competency.

O’Flaherty said the EU’s problem is not a lack of human rights legislation. The challenge is to ensure that EU lawmakers don’t slip into complacency and use the tools that do exist. Giving the Charter of Fundamental Rights its due prominence is one way that can be achieved, he said.