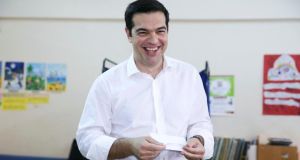 Casting his vote in Sunday’s referendum, Greece’s prime minister said that the Greek people were determined to “trump fear” and to carve a new path for all the people of Europe.

Alexis Tsipras made the comments in a voting station in the central Athens district of Kypseli, where he lived before becoming prime minister in January.

“The Greek people are sending a very powerful message. A message of dignity and determination. A message that they are taking control of their choices. Many may try to ignore the will of a government. But no one can ignore the will of a people who are seeking to live with dignity, to live life on their own terms,” Mr Tsipras said.

He expressed his conviction that “from tomorrow we will have set a new course for all the peoples of Europe. A path back to Europe’s founding values of democracy and solidarity … I am very optimistic.”

His finance minister, Yanis Varoufakis, said “the enormous failures of the Eurogroup had led to ultimatums that the people are not aware of. Today the Greek people have the opportunity to issue their verdict on the final ultimatum. [This is a] solemn moment, that gives hope to Europe that a common currency and democracy can coexist.”

Panos Kammenos, the leader of the junior coalition Independent Greeks party, said the referendum was “a great day for the Greek people who are not afraid”.

“Democracy affords citizens the right to make decisions themselves and not those who want to subjugate citizens and states,” Mr Kammenos, who is also defence minister, added.

In an appeal for unity, the country’s president said citizens needed to vote in accordance with their conscience and in the national interest.

“Regardless of the outcome of the referendum, we have an obligation to tread the difficult path of tomorrow with absolute unity. This is what our forebears did at crucial times and this is our obligation today,” Prokopis Provopoulos said.

The government has called for a No vote in the plebiscite, which asks citizens if they agree or disagree with a proposal from the country’s lenders that the lenders say is no longer on the table.

Most of the opposition parties have called for a Yes vote. Neo-Nazi Golden Dawn also supports a No, while the Communist Party, which rejects both the lenders’ and government proposals, has called on voters to use a ballot prepared by the party.

After casting his vote, main opposition New Democracy leader Antonis Samaras, said: “Today we Greeks are deciding the fate of our country. We are voting Yes to Greece, Yes to Europe.”

Expressing his hope that the “seed of discord that some thoughtlessly sowed will not bear fruit”, the leader of the centrist Potami party, Stavros Theodorakis, said: “In a few hours, we must be united in facing the great problem of the country. We must strengthen its European course. I hope the prime minister keeps his promise.”

But in an interview with a German news magazine, the Potami leader said the prime minister needed to resign: “He is the problem, he is the one that must go”.

Casting her ballot, the recently elected leader of the socialist Pasok party, Fofi Gennimata, said Greeks wanted a “viable agreement” and were sending a “resounding Yes to Greece and to Europe”.

In an interview with a Sunday paper, the Golden Dawn leader Nikos Michaloliakos, said a No result would “be an act of national pride and literally a triumph”.

Voting in 4,800 polling stations began at 5am Irish time and will end twelve hours later. The earliest indication of the final result is expected at 7pm Irish time.

Voters are being handed two ballots: One containing the referendum question and a blank one for those who wish to abstain.

Voters must place a cross “+” (the use of an “x” will spoil the vote) in either the No or Yes box. For the referendum to be valid, turnout must be at least 40 per cent.