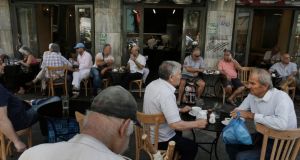 Athenians enjoy their coffee at a cafe, two days after the referendum. Photograph: Yannis Kolesidis/EPA

Pharmacist Dimitris Tsiribis often wonders what life would be like if he were running his business in a country where systems functioned seamlessly and he could supply his customers at the touch of a button.

“I think I’d be bored to be honest, because since opening a pharmacy in 2002, we’ve always operated under such difficult conditions, apart from three years just before the crisis,” he says, as he prints out a list of 37 prescription medicines that he has ordered in recent days but which his distributor cannot supply.

Since the Greek government imposed capital controls and shut down the banks last week, many pharmacies have encountered problems in ordering prescription medicines.

Depending on their supplier, they may only receive a portion of what they ordered. Other distributors are demanding cash up front.

Scanning the list, he cannot explain why some drugs are proving harder to get than others. “It’s a lottery and there’s no logical explanation why certain drugs seem to be in short supply,” he says.

The sixth item on Tsiribis’s drugs wish list was Clexane pre-filled syringes, which acts against clots forming in the blood, that he needed for a customer who recently had an operation.

“I had four boxes in stock and ordered 11 more to have enough for her prescription, which was one injection a day. When my distributor said they had none, I called the manufacturer Sanofi, who said they could supply me provided I paid cash up front,” explains Tsiribis, as he sips on his evening coffee outside his pharmacy on the main street in Loutraki, a seaside town about an hour southwest of Athens.

While he had no difficulty paying the €83.25 for the Clexane order, he says that could be a problem for about a fifth to a quarter of Greek pharmacists are struggling with credit problems.

“Every day is a battle where you are looking for stock within 24 hours. This has long been the situation, but it has got a lot worse in the past five years, particularly since 2012. Since then, we’ve nothing on the horizon, so we just try to get through every day,” he says.

When he ran out of insulin on Friday due to a mix up with his distributor, a colleague supplied him with some. Tsiribis is now waiting for a delivery of the drug so he can repay his friend back in kind.

“Once we manage to find a product, we’re just happy to strike the drug off the list as we have to keep going in the search for more. That’s the way things are,” he says, appearing relatively calm despite the problems facing his profession and country. Five years of austerity have made people resourceful and given rise to a widely held feeling that things cannot get any worse.

Across the road, a fellow pharmacist, Eleni Stellatou, agrees that the problems facing her profession and its customers are not new, but have been exacerbated by the introduction of capital controls.

“Two things have changed since the banks closed on Monday. The first is that we cannot order as much drugs as we want. I have two suppliers and each has imposed limits on orders, while other distributors are demanding cash up front.”

The limits were necessary as it will safeguard the supply of medicines for the next few weeks.

“Some customers are very worried and wanted to hoard medicines. But now there is some control,” she says.

The second change, according to Stellatou, is that about one in five of her customers “cannot pay for their prescriptions up front”.

That’s particularly the case for pensioners, many of whom don’t have bank cards, just deposit books. While Greek cardholders can withdraw €60 a day from ATMs, pensioners have been restricted to a one-off withdrawal limit of €120.

Stellatou is now dispensing to many customers on credit, even though the Greek state is 3.5 months behind in reimbursing pharmacists for prescriptions.

Those refunds, Tsiribis estimates, account for 70 per cent of a pharmacist’s average monthly income on average.

“Most of my customers are very reliable and are ashamed about owing money, so they try to pay me back as quick as they can.”

Stellatou says that sales of cosmetics have almost collapsed. “People aren’t even buying sunblock and it’s the middle of the summer.”

The overall situation has forced Stellatou to pay her employees in cash for the first time since opening her business 13 years ago. They received half of their wages on July 1st and the rest she hopes to pay on the 15th.

The two pharmacists agree that while they and their customers are anxious about lies ahead, there is no panic.

“The reaction of the public has been the most mature in all the years of the Greek crisis.

“They were afraid when the capital controls came in, but we assured them that we and their medicines would be here the next day and I have to say that most people have accepted our assurances,” says Tsiribis.

“People understand that we, as pharmacists, also face problems. They know that it takes months for the health system to reimburse us. They know what we are all in this together.”