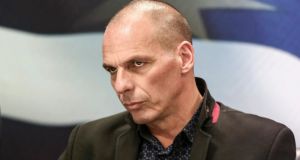 Confirming their pre-election pledges but dispelling hopes among the country’s lenders that they would proceed cautiously upon taking office, members of Greece’s new left-led government announced a rolling back of austerity measures as they assumed control of ministries from their predecessors.

Freshly appointed ministers said they would be freezing the privatisation of key utilities, reversing cuts to the minimum wage and rehiring thousands of public sector workers sacked under the bailout-linked austerity measures implemented by their predecessors.

Laying out his government’s priorities at the first meeting of his cabinet, prime minister Alexis Tsipras said his main priorities were the economy, the relationship with the lenders and the country’s humanitarian crisis.

“Our priority is to support the economy, to help it get going again,” Mr Tsipras said, addressing his cabinet.

“We are ready to negotiate with our partners in order to reduce debt and find a fair and viable solution,” he added.

The incoming finance minister said he was confident that Greece could succeed in reaching an agreement with its creditors.

“Europe has shown that it knows how to find solutions and avoid ultimatums,” Yanis Varoufakis said, expressing his hope that a series of forthcoming meetings with Greece’s EU partners would pave the way to an agreement “bridging” the previous memorandum agreement and a new final deal.

This would put an end to the “self-reinforcing crisis”, he said. Confirming one of Syriza’s pre-election pledges, Mr Varoufakis said he would be reducing spending on advisors and consultants in order to rehire hundreds of cleaning staff fired from the ministry and tax offices in 2013.

Announcing a freeze on further selloffs of the country’s power company DEI, the incoming energy minister said the company would “remain under state control”, describing it as “a vehicle of a productive reconstruction . . . We want to re-examine all its relationships and to relieve DEI from any harmful interconnection with private interests,” said Panayiotis Lafazanis, a leading member of the hard-left, eurosceptic platform within Syriza that has the support of about 30 per cent of the membership.

Reversing other key components of the country’s bailout agreement with its troika of lenders, another minister said he would move to restore the minimum monthly wage, which had been cut by between 22 and 32 per cent in 2012, to €751.

“We will move at odds with the memorandum demands and directions because that’s the people’s choice,” the new labour minister, Panos Skourletis, said.

The announcement was welcomed by the national retailers association ESEE, whose chairman said cuts had had not only failed to improve competitiveness but also caused unemployment to soar as the economy ground to a halt.

Political developments in Athens kept the Greek stock market deep in the red for the third straight session on Wednesday, bringing weekly losses to 15.4 per cent. Citing the government’s new policies, rating agency Standard & Poor’s said it had revised Greece’s outlook to “creditwatch negative” from “stable”, on Wednesday.

At the diplomatic level, the new government’s stance on Ukraine, where it dissents from that of the EU, and its relations with Russia have come under close scrutiny. Last May as opposition leader, Mr Tsipras, accompanied by his new foreign minister, Nikos Kotzias, travelled to Moscow where they denounced the western policy on Ukraine.

“It is a regression for us to see fascism and the neo-Nazis entering European governments again and for this to be accepted by the EU,” Mr Tsipras said, referring to the interim government in Kiev.