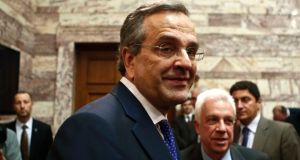 Greece’s prime minister and leader of New Democracy party Antonis Samaras: made a surprise announcement that he was bringing the election for a new head of state forward by two months. Photograph: Alkis Konstantinidis/Reuters

With only four days to go before Greece’s MPs begin voting for the country’s new president, it’s still far from clear how the coalition under prime minister Antonis Samaras will secure the necessary support to have its candidate elected.

This it must do to prevent snap elections that would almost certainly see it lose power to a government led by the anti-memorandum Syriza party.

Already a clear 25 votes short of the minimum required to elect a president, Mr Samaras earlier this week decided to take a gamble by making a surprise announcement that he was bringing the election for a new head of state forward by two months.

At the same time, he announced that a former European environment commissioner and vice-president of his conservative New Democracy party, Stavros Dimas, would be the government’s candidate for the largely ceremonial but lucrative post, which traditionally has been the preserve of male retirees from the political or judicial establishment.

The last-minute choice of Mr Dimas, a political moderate within New Democracy, is unlikely in itself to help the government garner more votes in a parliamentary contest that is being treated as a vote of confidence by the opposition parties, particularly Syriza.

A number of polls published this month suggest Syriza has a six-point lead over Mr Samaras’s New Democracy.

When the election procedure, which can go to three rounds, begins this Wednesday, the government, with 155 MPs, is certain to fall short of the 200 votes it needs to win in the 300-member chamber.

A second round will then take place, again with the same threshold, on December 23rd.

If the government is to survive, it must secure the necessary support for the final round of voting, scheduled for December 29th, where the requirement to elect a president drops to 180 MPs.

Failure to elect Mr Dimas by that date would result in the dissolution of parliament and trigger snap national elections within 10 days.

To stave off an early election and almost certain defeat, the government would need to win support from at least two sources within parliament. One of them is the diverse pool of 24 independent MPs, all of whom were elected on party tickets but subsequently departed from their respective parties.

As it is almost impossible for an independent candidate to win a seat in parliament, by voting against the government the independents would be like turkeys voting for Christmas.

Though the temptation to prolong their €8,000-a-month salaries is huge, only seven independents have said they indent to vote with the government. The same number say they are undecided, and 10 have vowed to vote against Mr Dimas.

Faced with this difficult parliamentary arithmetic, Mr Samaras has presented the presidential election as one essential for Greece’s survival, a message he hopes to bring to bear on wavering MPs.

“We shed blood to take the word ‘Grexit’ away from the mouth of foreigners, and Syriza is bringing this word back to their mouths,” Mr Samaras told his party on Thursday.

“All MPs must now decide if we will elect a president or go to snap elections that people don’t want, the markets are afraid of, and which might have catastrophic consequences for the country.”