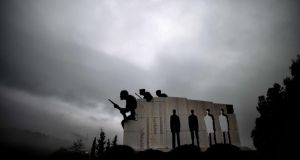 The memorial for the victims of the Distomo massacre in Greece perpetrated by Nazis during the second World War, pictured on March 26th. Germany’s economy minister branded Greece’s demand for €278.7 billion in reparations from the second World War as ‘stupid”’ on Tuesday. Photograph: Aris Messinis/AFP/Getty Images

Germany’s economy minister branded Greece’s demand for €278.7 billion in reparations from the second World War as “stupid“ on Tuesday, while the German opposition said Berlin should repay a forced loan dating from the Nazi occupation.

Greece’s deputy finance minister Dimitris Mardas made the demand on Monday, seizing on an emotional issue in a country where many blame Germany, their biggest creditor, for the tough austerity measures and record high unemployment connected with two international bailouts totalling €240 billion.

Germany’s vice chancellor and economy minister Sigmar Gabriel called the demand “stupid”, saying Greece ultimately had an interest in squeezing a bit of leeway out of its euro zone partners to help Athens overcome its debt crisis.

“And this leeway has absolutely nothing to do with World War Two or reparation payments,“ said Mr Gabriel, who leads the Social Democrats (SPD), junior partner in the ruling coalition with chancellor Angela Merkel’s conservative CDU party.

Berlin is keen to draw a line under the reparations issue and officials have previously argued that Germany has honoured its obligations, including a 115-million deutschemark payment made to Greece in 1960.

A spokeswoman for the finance ministry said on Tuesday that the government‘s position was unchanged.

Eckhardt Rehberg, a budget expert for the CDU, accused Athens of deliberately mixing the debt crisis and reform requirements imposed by Greece‘s international creditors with the issue of reparations and compensation.

“For me the figure of €278.7 billion of supposed war debts is neither comprehensible nor sound,” he told Reuters. “The issue of reparations has, for us, been dealt with both from a political and a legal perspective.”

But Greece’s demand for Germany to repay a forced wartime loan amounting to €10.3 billion found support from the German opposition, with members of the Greens and the far-left Linke party saying Berlin should cough up.

Both Manuel Sarrazin, a European policy expert for the Greens, and Annette Groth, a member of the leftist Linke party and chairman of a German-Greek parliamentary group, said that Berlin should repay a so-called occupation loan that Nazi Germany forced the Bank of Greece to make in 1942.

Berlin and Athens should “jointly and amicably” take any other claims to the International Court of Justice, Mr Sarrazin said.

Ms Groth went further, saying: “If you look at Greece‘s debt and the European Central Bank’s bond purchases every month, it puts the figure of €278.7 billion into perspective.”

She said the German government should, at the very least, talk to Athens about how it came up with that figure.

“The German government’s categorical ‘Nein’ certainly cannot be allowed to stand. That‘s disgraceful 70 years after the end of the war,” Ms Groth said.

Mr Gabriel did say that Germany needed to keep asking itself whether it had done enough in connection with the second World War.

He said that while the “Treaty on the Final Settlement with respect to Germany” signed in September 1990 by the then-West Germany and East Germany with the four second World War allies had put a “formal end” to the reparations debate, Germany could not – for the foreseeable future – draw a line under its responsibilities that arose from the second World War.