Germany and Hungary agree not to provide arms to Ukraine

Disagreement over philosophy of a Budapest government critics call anti-democratic 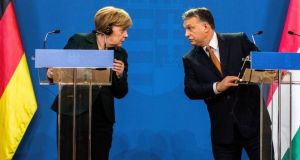 The leaders of Germany and Hungary have agreed not to sell weapons to Ukraine to use in its war against Russian-backed separatists, but have disagreed over the philosophy of a Budapest government that critics call anti-democratic.

Hungarian prime minister Viktor Orban hosted Chancellor Angela Merkel yesterday for talks that were closely watched by Moscow and western capitals, given his efforts to maintain good relations with Russia and his criticism of EU sanctions against it.

Russian president Vladimir Putin is due to visit Budapest in a fortnight’s time, and analysts said Dr Merkel was keen to gauge Mr Orban’s stance on Ukraine, where heavy fighting continued and separatist leaders announced plans to draft an additional 100,000 men in the coming weeks.

“For my part, I can say that Germany won’t support Ukraine with weapons,” Dr Merkel said in Budapest. “I’m firmly convinced that this conflict cannot be solved by military means.”

Mr Orban said Hungary shared those positions, but there was no public comment from either leader on Budapest’s relationship with Russia, which is lending Hungary €10 billion to expand its only nuclear power plant.

Hungary’s leader has named Russia – along with China, Turkey, India and Singapore – as states that are successful while not being “western, not liberal democracies and in some cases probably not even democracies”.

In a now infamous speech last July, Mr Orban said the “new state that we are building in Hungary today is not a liberal state . . . I don’t think our European Union membership precludes us from building an illiberal new state based on national foundations.”

“We talked about the development of our civil societies, and I pointed out that . . . it is important to value the role of the opposition, of civil society, of the media,” Dr Merkel said at a conference with Mr Orban. “I cannot understand the word illiberal in connection with democracy.”

In response, Mr Orban said: “Not all democracies have to be liberal . . . Those who say that democracy is necessarily liberal are trying to put one school of thought above the rest and we’re not going to grant that privilege.”