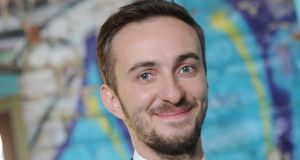 The German row over the middle finger of Greek finance minister Yanis Varoufakis has taken an absurd turn.

Since Sunday evening Germans have obsessed over a television talk show which, with Mr Varoufakis as guest, screened a 2013 video clip of him giving a talk in Zagreb.

In the clip Mr Varoufakis says Greece should default on its loans saying, “Stick the finger to Germany and say . . . you have to solve the problem by yourself” – while sticking up his left middle finger.

After seeing the clip Mr Varoufakis denied giving what Germans dub the Stinkefinger. Instead, with five million Germans watching, he claimed the video had been doctored. The television show disputes this but the scandal has rolled on for days, eclipsing everything else the minister said during his first prime time German television appearance.

The row took a fresh twist on Wednesday evening when satirical programme Neo Magazin Royale, on a rival channel, claimed that it had doctored the video and uploaded it to the internet.

Host Jan Böhmermann claimed his team had used digital editing software to insert the indecent gesture. Then it showed another clip it said was the original, in which Mr Varoufakis made the same remarks but without the gesture. A regretful Mr Böhmermann told his audience they were behind the “fake” Stinkefinger footage.

“Sorry Mr Varoufakis, we won’t do it again,” he said

It didn’t take long, however, until the fake was itself revealed as a fake.

The original footage of the event does appear to show Mr Varoufakis showing the Stinkefinger. The finger-free “original” as shown on Neo Magazin Royale was, in fact, the doctored one. Still following?

The same television show caused amusement – and some confusion – three weeks ago with another video, V for Varoufakis, mocking both German correctness and the Greek minister who, it said, “puts the Hell in Hellenic”.

Like this week’s admission, the earlier video left audiences unsure who exactly Mr Böhmermann was skewering with his satire: the domestic German audience, the Greeks, the mainstream German view of Greece – or all three.

His only clue was a line during the show criticising as disproportionate the German reaction to the Stinkefinger scandal. He suggested the average German loves to be provoked as an excuse to lose his temper.

“We devastated Europe twice within a century but [go] nuts when somebody gives us the finger,” he said. “An objective discussion is no longer possible.”

Mr Varoufakis appears to have been amused by the fake – or double fake – though still insists on Twitter that the Zagreb footage was doctored. As his account has yet to be confirmed by Twitter, however, we cannot be sure if these claims are from Mr Varoufakis – or Varoufake.