Funeral ceremonies in Paris and Jerusalem for Paris shooting victims

Following a minute's silence in respect of the victims of the recent attacks in Paris, the French parliament breaks into a rendition of 'La Marseillaise' for the first time since 1918. Video: Assemblée Nationale 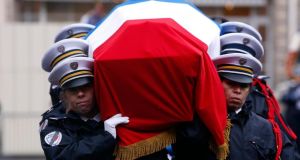 Police officers carry the coffin of a victim during a memorial service held for the police officers killed in the Paris attacks, at the Prefecture de Police in Paris, France, on Tuesday. Photograph: Reuters 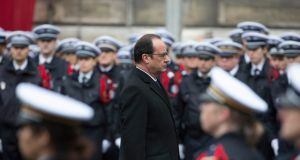 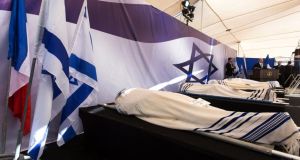 The four coffins of Jews killed in the Paris kosher supermarket, Yoav Hattab, Yohan Cohen, Francois-Michel Saada and Phillipe Braham, lined up in front of a large flag of Israeli with its Star of David as prime minister Benjamin Netanyahu delivers his eulogys at the funeral in the cemetery on Tuesday, before the bodies, wrapped in prayer shawls, are removed and taken to graves for burials. Photograph: EPA 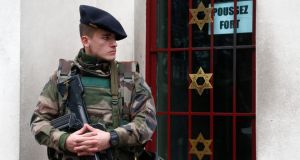 A French soldier secures the access to a Jewish institution in Neuilly-sur-Seine, in western Paris on Tuesday, as part of the security plan put in place after last week’s attacks by Islamist militants. France will deploy 10,000 soldiers on home soil and post almost 5,000 extra police officers to protect sensitive sites after the killing of 17 people by Islamist militants in Paris last week. Photograph: EPA

He was speaking as funeral ceremonies were held in Paris and Jerusalem for seven of those shot dead in last week’s attacks in Paris.

The officers “died so that we may live in freedom”, he said at the televised ceremony.

At the ceremony Mr Hollande went first to the family of Ahmed Merabet, the French Muslim policeman killed in the attack on the offices of Charlie Hebdo. A total of 17 people were killed by gunmen during the attacks over three days last week.

The satirical newspaper lampooned religions and had been threatened repeatedly for its caricatures of the Prophet Mohammed. Seventeen people were killed in the attacks, along with the gunmen.

It is planning to run a front cover in its edition tomorrow depicting Mohammad.

French police said as many as six members of a terrorist cell involved in the Paris attacks could still be at large, including a man seen driving a car registered to the widow of one of the gunmen.

In Jerusalem, the four Jewish victims of an attack on a kosher supermarket; Yoav Hattab, Philippe Braham, Yohan Cohen and Francois-Michel Saada, will be buried at the Har HaMenuhot cemetery.

Relatives of the victims spoke briefly in memory of their loved ones.

Israeli president Reuven Rivlin repeated his message from Israeli leaders for European Jews to move to the Jewish state.

“Returning to your ancestral home need not be due to distress, out of desperation, amidst destruction, or in the throes of terror and fear.

“Terror has never kept us down, and we do not want terror to subdue you. The land of Israel is the land of choice. We want you to choose Israel because of a love for Israel.”

French police officials said authorities are searching the capital for a Mini Cooper registered to Hayat Boumeddiene, the widow of Amedy Coulibaly, who was behind the attack on a kosher supermarket.

Turkish officials say she is now in Syria. One police official said the cell consisted of about 10 members, and that “five or six could still be at large”, but he did not provide names.

Another official said the cell was made up of about eight people and included Boumeddiene. One of the police officials also said Coulibaly apparently set off a car bomb on Thursday in the town of Villejuif, but no one was injured and it did not receive significant media attention at the time.

French prime minister Manuel Valls said the manhunt is urgent because “the threat is still present”. The country has deployed 10,000 troops to protect sensitive sites including Jewish schools and neighbourhoods.