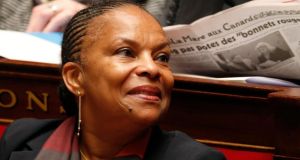 French prime minister Jean-Marc Ayrault has filed a lawsuit against the extreme right-wing publication Minute for “racist insults”. If convicted, its editors could in theory be sentenced to six months in prison and fined €22,500.

The magazine’s cover, published yesterday, showed the justice minister Christiane Taubira with the caption: “Clever as a monkey, Taubira gets the banana back.”

(In French slang, “to have the banana” means to be happy and smiling.)

Ayrault said he “condemn[ed] with utmost force the racist, unbearable and scandalous attacks” against Taubira, adding that he supports her “more than ever”.

The French political class were unanimous in condemning Minute’s report with words such as “abject” and “obscene”. The extreme right wing National Front (FN) also condemned it, though officials accused mainstream politicians of using the incident to harm their party.

Minute recounted recent racist attacks against Taubira, who has been the focus of right-wing antagonism since she wrote the text legalising same-sex marriage. Anne-Sophie Leclère, an FN mayoral candidate in the Ardennes, said on television last month that she would rather see Taubira “in a tree” than in government. Leclère posted a photomontage comparing the justice minister to a monkey on Facebook.

The FN disowned her.

On October 25th in Angers, several children, accompanied by their parents at a demonstration against gay marriage, shouted at Taubira, “Monkey, eat your banana!” A 12-year-old girl shook a banana skin at the minister.

Racist rhetoric
Minute described these as “non-events”. But their occurrence, as well as an increase in homophobic remarks and derogatory comments about Roma, have heightened disquiet over the rise of racist rhetoric in France.

Interior minister Manuel Valls said he wants to ban the offending issue of Minute. But Valls is both accused and accuser. The anti-racist group MRAP has filed a lawsuit against him for saying that most Roma cannot be integrated in France and should return to eastern Europe.

The prime minister met with the ministers of the interior, justice and culture yesterday to discuss the appropriate response to the Minute cover. Taubira said she would not sue the magazine, because she did not want to give it free publicity. It was impossible to find Minute in Paris kiosks yesterday. News vendors said it had sold out within minutes.

A 2004 law demands that Twitter and Facebook promptly remove racist comment from their websites. Those who post such remarks risk substantial fines and imprisonment. Yet invective against Taubira, Muslims and Roma proliferates on the web. The “don’t feed the troll” rule admonishes internet users to ignore it rather than spread exposure.

Taubira reacted to earlier attacks in an interview published by Libération on November 6th. “Beyond my case, these racist attacks are an attack on the heart of the Republic,” she said. “It is social cohesion that is knocked down; the history of a nation that is questioned.”

Taubira said the frequency of racist rhetoric “is clearly a question of inhibitions disappearing, of dykes that have broken.”

Is France racist? “France, certainly not. Some Frenchmen, certainly!” commented the Canard Enchaîné.

Quiet Hollande
“France has not become racist. France was always racist,” the Franco-Togolese politician Kofi Yamgnane told France Info radio yesterday. In the past, racism was considered an offence, not an opinion, he said, accusing right-wing politicians of legitimating racist rhetoric. In particular, Yamgnane criticised then president Nicolas Sarkozy for saying in Dakar in 2007 that, “The black man has not entered history”.

Yamgnane appealed to president François Hollande to speak out against racist expression. But Hollande reached a record low 21 per cent approval rating this week, and it is far from certain that a lecture by him would have the desired effect.

Ms Taubira told Libération last week that “reactions had not been up to it” after the attacks on her.

By filing a lawsuit against Minute on Tuesday night, before the publication reached the newstands, the prime minister tried to react quickly this time.