Deal may include redistribution of posts in favour of People’s Party, the junior partner 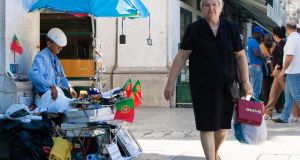 Portuguese prime minister Pedro Passos Coelho has been desperately trying to keep his centre-right government afloat this week, in the knowledge that the country’s political turmoil could jeopardise its bailout programme and even test the stability of the euro zone economy.

Mr Passos Coelho was locked in crisis talks yesterday with Paulo Portas, leader of the People’s Party, the junior partner in the governing coalition.

Mr Portas resigned as foreign minister on Tuesday in protest at the prime minister’s choice of Maria Luís Albuquerque as new finance minister, and following more general disagreements over how to manage the economy.

At the end of the talks yesterday evening, the prime minister said a “formula” to continue the coalition had been found.

Hanging in balance
With only two People’s Party ministers left in a government dominated by Mr Passos Coelho’s Social Democratic Party (PSD), the coalition’s existence had been hanging in the balance.

“The prime minister will do everything he can to survive with the support of the People’s Party,” said António Pinto Costa of Lisbon University’s Institute of Social Science, who believes Mr Passos Coelho’s PSD would suffer badly if the snap elections the opposition are demanding were held.

Mr Pinto Costa said this was the third time these two parties had governed together, so they were both used to the tensions of coalition politics.

Although details of the new deal were not available yesterday, a possible solution to the impasse would be the continuation of the coalition with a redistribution of portfolios in the People’s Party’s favour.

Portugal has had plenty of political crises, most notably after the dramatic, peaceful fall of the right-wing dictatorship in 1974, after which it liberated its African colonies and struggled to adjust to democracy.

This time, the economy is at stake. Mr Passos Coelho has made adherence to the terms of the €78 billion bailout loan – which he inherited on taking power in 2011 – the centrepiece of his tenure. Vítor Gaspar, the finance minister whose sudden resignation on Monday sparked this recent turmoil, was seen as the prime minister’s main ally in pushing through an unpopular austerity programme of tax rises and welfare cuts.

Although Mr Gaspar’s replacement, Ms Albuquerque, is seen as equally hawkish, the markets have punished Portugal, fearing that if Mr Passos Coelho were to be unseated, a new government might not be as committed to the EU-IMF troika’s recommended reforms and fiscal targets. Midweek, the interest on Portugal’s 10-year bonds went over 8 per cent, which is seen as unsustainable.

In a note to investors on Wednesday, the chief economist of Denmark’s Saxo Bank, Steen Jakobsen, painted a gloomy picture. “Portugal may have to ask for a second bailout in the next six months,” he said.

Although Portugal has missed some of its fiscal targets since taking on the bailout loan, it has been seen as making a sustained effort to implement the policies agreed with the troika.

‘Obvious risk’
“The initial reaction of the markets shows the obvious risk that the financial credibility built up by Portugal could be jeopardised by the current political instability,” European Commission president José Manuel Barroso, himself a former Portuguese prime minister, said.

But many Portuguese blame austerity for the country’s extended recession, and an unemployment rate that is approaching 18 per cent. Revelations this week that Mr Gaspar was spat at and insulted by fellow customers as he shopped with his wife in a supermarket last month reflect the kind of pressure he was under before stepping down, while at the same time highlighting the widespread hostility to austerity.

There has also been fear of possible contagion in other countries because of Portugal’s difficulties. Spain – which spent much of last year warding off the need to request a sovereign bailout of its own – was among those countries whose borrowing costs spiked this week, with the Egyptian crisis combining with Portugal’s woes to spook the markets.

If Portugal’s coalition members have indeed found a way to maintain stability, many other countries will breathe a sigh of relief.