Europe Letter: EU may be suffering from ‘enlargement fatigue’ 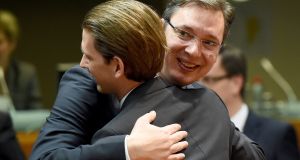 As the European Union wraps up its work for 2015 and leaders gather for the final summit of the year, focus continues to rest on two issues that promise to dominate the agenda in 2016: the refugee crisis and Britain’s bid to renegotiate its relationship with the EU.

Over the past week, however, the EU has been tying up other loose ends.

On Tuesday in Brussels, the General Affairs Council adopted its annual conclusions on the EU’s enlargement process. In a communiqué adopted by member states, including the Irish Minister of State for European Affairs Dara Murphy, the EU reiterated that “enlargement remains a key policy of the European Union”.

For some of those countries on the waiting list to join the EU, the reality seems very different.

In Jean-Claude Juncker’s first speech to the European Parliament on taking office last year, he declared there would be no further enlargement during his five-year term at the helm of the European Commission – striking a blow to the hopes of many would-be EU member states.

Technically, Juncker’s assertion was logical: the huge work involved in accession negotiations means it is virtually impossible that any new country will join before 2020. Still, the sentiment expressed seemed to suggest that the expansion of the EU was not a priority.

Many of the countries waiting in the wings complain that they must adhere to much stricter rules on fundamental rights and democracy than were applicable to their predecessors.

Serbia, for example, quietly complains that it lacks political champions within the EU. In contrast, Croatia was welcomed into the club with the backing of Germany and others in 2013. Others bemoan the fact that EU member states, such as Hungary, are blatantly flouting EU standards on democracy while they are obliged to fulfil even harsher criteria to be considered as candidates for membership.

Kosovo is one of the seven prospective EU members growing increasingly impatient.

Speaking earlier this week, the country’s minister for European integration, Bekim Collaku, said he believes his country, whose independence is not recognised by five EU member states, has been treated unfairly by the EU accession process.

In particular, Collaku says Kosovo is the only Balkan country that does not benefit from visa-free travel for its citizens, arguing that it must fulfil twice as many conditions as others.

Collaku is confident that a European Commission report expected this month on visa liberalisation will be positive. “If we don’t get the green light soon,” he says, “everybody here will lose trust in the EU’s ability to deliver, to provide a real EU perspective for the people of Kosovo.”

Even the apparently intractable problem of Kosovo’s non- recognition by five member states doesn’t dent Collaku’s optimism. He highlights the progress that has already been made in Kosovo’s EU accession process, such as the signing of a Stabilisation and Association agreement in October.

“In the EU we have seen that, where there is a political will, you have the power to push things forward and make things happen.”

The emergence of the western Balkans route as the main transit corridor for refugees travelling from Greece into the rest of the EU has focused attention in Brussels on the countries of the former Yugoslavia.

As the recent EU-western Balkan summit shows, many in the EU are realising that they need the support of the Balkan states as much as those states need the European Union.

While officials have been keen to play down any suggestion of a link between furthering accession talks and help on the refugee crisis, the opening this week of two chapters in Serbia’s accession negotiations with the EU is hugely significant for the country’s membership path.

Serbia and Macedonia have been privately praised for their handling of the migration crisis, particularly as criticism of Greece’s border control policy has grown.

The launch of the Serbian chapters on Monday in Brussels took place on the same day as the EU opened Chapter 17 negotiations with Turkey. This is seen as a signal of how far the EU has travelled over the past 12 months on its enlargement path.