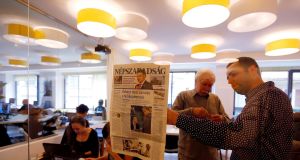 Journalists of the leftist newspaper Nepszabadsag, which was unexpectedly shut down on Saturday, paste a copy of the last issue on to the wall of a temporary newsroom in Budapest, Hungary. Photograph: Laszlo Balogh/Reuters

The European Union and media freedom groups have expressed concern over the closure of Hungary’s main opposition newspaper, which critics of prime minister Viktor Orban see as more evidence of his growing authoritarianism.

The owners of the leftist Nepszabadsag publication halted operations of its print version and website on Saturday, silencing the biggest media outlet in Hungary to regularly criticise Mr Orban’s government.

The Mediaworks company said the suspension was due to Nepszabadsag’s financial losses, but its reporters called the sudden closure a “coup” that was punishment for highlighting alleged corruption in Mr Orban’s inner circle.

The move comes as Mr Orban continues to flex his political muscles in defiance of the EU, following a referendum in which he urged voters to block any attempt by Brussels to oblige Hungary to accept refugees.

Those who voted showed overwhelming support for his stance, and Mr Orban wants to alter Hungary’s constitution to block the imposition of any refugee “quota” – despite low turnout at the referendum making it legally invalid.

“The commission is aware of and concerned about the suspension of the publication of the Hungarian newspaper Nepszabadsag,” Margaritis Schinas, a spokesman for the European Commission, said on Monday.

“Questions have been raised on the reasons of the suspension. We are following very closely, we are very concerned . . . Media freedom, pluralism and the protection of journalists are at the very base of a free and democratic society.”

Dunja Mijatovic, media freedom representative for the Organisation for Security and Co-operation in Europe, called the closure of the 60-year-old Nepszabadsag a “huge blow” to press freedom in Hungary.

“The way it was done raises reasons for concerns – without transparency, without due process . . . It’s hard to believe this is just a simple business move. All this to me looks like something that’s definitely further damaging media freedom in Hungary,” she said.

“The European Commission should pay greater attention to the issues related to press freedom in Hungary . . . If you want to live in democracy you have to pay a price and you need to hear differing, critical voices. At the moment, those voices are disappearing in Hungary and I think this is extremely dangerous,” Ms Mijatovic added.

Mr Orban has tightened his grip on Hungary’s news outlets in recent years, as his allies have taken over broadcasters and publication and the media sector as a whole has come to rely on advertising acquired through government-friendly agencies.

“The Nepszabadsag editorial team wants to stick together and carry on working,” the newspaper’s deputy editor-in-chief Marton Gergely told Reuters.

“We believe the (closure) happened because of what we were doing . . . It is not necessarily due to the coverage of the past one or two weeks. The paper was shut down because they felt we could not be disciplined otherwise,” he added.

Mr Orban has not commented on the plight of Nepszabadsag, but on Monday he pressed ahead with business as usual, submitting a draft constitutional amendment on the refugee issue to Hungary’s parliament, which is dominated by his supporters.