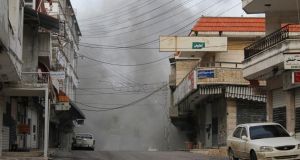 In the hills overlooking the Mediterranean sea’s most easterly shoreline, a group of elderly men sit around a backgammon table laughing and arguing in the spring breeze. At first glance, they seem untroubled by the irregular sound of explosions wafting across the hills from nearby Syria.

Vakifli in south Turkey is the only exclusively Armenian village outside Armenia. It is also close to Kessab, a predominantly Christian town a short distance over the Syrian border overrun by militant rebel groups last month.

The rebel offensive for Kessab was co-ordinated a short distance south of Vakifli in Turkish territory with, some Armenians here say, the explicit help or inertia of local Turkish military units.

Almost all Armenian Christians in Kessab have fled the town. Those

who stayed said they were prepared to die only in their own homes.

Though media reports vary, locals in Vakifli say no Armenian Christians crossed the border north into Turkey, from where the rebels attacked. The assault proved to be only the most recent example of how the Syrian conflict is exacerbating religious tensions in the region.

On a recent visit, village leaders told The Irish Times of their deep fear of foreign fighters operating in the area and their militant attitude towards Christians.

“We used to go there [to Kessab] and they used to come here until the war stopped that,” said one village elder who asked not to be identified. “Every day they came here.”

The families who stayed in Vakifli after the Turkish Empire’s mass deportation of Armenians in 1915 are a rare, tenacious breed.

Then, thousands relocated to Aleppo and Damascus, Syria’s two largest cities where today Armenians again find themselves under attack. Many more died during death marches into the Syrian desert.

Today, locals say there are about 50 Armenian families in the hills and winding roads that make up Vakifli. “Of course we are afraid for the Armenians here. No one is asking how these foreign fighters are getting into Turkey and going to Syria,” said the elder. “Our government has stood between us and the Armenians in Kessab and we couldn’t do anything,” he said.

Zeki, a thirtysomething man who lives abroad, was shaking with rage when telling of watching a video filmed by a Syrian rebel fighter in which his own village appeared in the background.

“We want to end the war and the solution is to help Bashar al-Assad keep out Nato and the EU,” he said.

For most of its 2,300-year history, the provincial capital Antakya, or Antioch as it was known, has been a paragon of tolerance. Communities of Arab and Turk Sunni and Alawite Muslims; Armenian, Orthodox and Syriac Christians; Jews and Kurds have lived and worked together for millennia.

Its long and colourful Christian history saw it become one of the most populous cities of the Roman and Byzantine empires and today Antakya boasts a vibrant if small Christian population.

On a recent Friday evening, about 120 Christians gather to celebrate a Lent service at St Paul’s Orthodox Church in the heart of old Antakya. Almost a thousand years ago, crusaders from England, France and Italy stayed here en route to Jerusalem.

During the hour-long ceremony, a three-person choir sings Easter hymns in Arabic, with the addressing of the congregation given in Turkish, the reason being that most young people don’t speak Arabic, one worshipper says. During the ceremony, a priest walks through the church waving an incense-filled thurible, immersing the air with spiritual scents.

“We don’t talk politics here but all I want to say is that Christians here live better than they do in Europe,” said Rizah, a well-dressed

Orthodox Christian man in his 60s.

Christians in this part of the world – where Christ walked 2,000 years ago – see themselves as the vanguard of their faith. A minority in all countries of the Levant, their numbers have been falling for decades due to emigration and low birth rates. The 2003 invasion of Iraq precipitated the almost total destruction of Baghdad’s Christian community and today in Syria, Christians are being used as pawns in a regional power game.

When a mortar fired by Syrian rebels struck an Armenian school in central Damascus this week, one child died and more than 60 people, mostly school children, were injured, according to Syrian state media. With the war in Syria looking set to continue for years, the region’s Christians have little to look forward to.

But back in Vakifli, there is defiance. “When the war is over, we’ll go there to help them rebuild their homes,” says 82-year-old Panos Chaprian of Kessab’s troubled Armenian community.

“The rebels wouldn’t dare come to our village,” says Zeki. “They know what they would get.”