Poles are in the mood for change, and Szydlo promises to achieve it as next prime minister 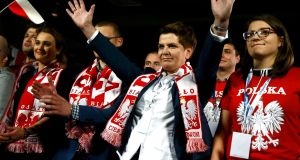 It’s 1pm at the “Amor” wedding palace, a function room of glass chandeliers and stick-on stucco in rural Poland – and the bride is running late.

About 200 people have gathered here today to renew their vows with the national conservative opposition party, Law and Justice (PiS). Tomorrow week, it looks as if the country will follow, saying “I do” to PiS and ending eight years of a liberal conservative rule under the Civic Platform (PO).

Poles seem in the mood for change and Beata Szydlo is the woman promising that change as Poland’s next prime minister. The small town of Makow Mazowiecki, with a population of 10,000, is 80km from Warsaw yet a world away from the “Warszawka”, as the buzzing capital’s beautiful people are mocked here in flatlands.

PiS and Szydlo are furiously courting this Poland, the “real” Poland they call it, an anti-elitist courtship that touches on the anxieties and vulnerabilities of those outside the big cities, with promises to do everything better than the current prime minister, Ewa Kopacz.

The PiS feel-bad campaign highlights the growing gaps – real and perceived – between urban and rural Poland, the winners and losers of a quarter-century of transformation. No one here discusses how PO kept Poland out of recession, kept the economy growing and transformed the motorways. Poland, we hear, “is in ruins”.

Celebrating the “real” Poland in the fake splendour of the Amor wedding palace is a nice, ironic touch. But the “real” Poles here, a crowd in jeans, fleece and anoraks, don’t do irony. Here in Makow Mazowiecki, Szydlo lists her campaign promises: lower the retirement age, raise tax-free allowances and boost benefits for families with children.

Enjoying their free tea and cake, voters don’t ask about the cost of the election promises, which opponents put at 300 billion zloty (€71 billion). “Pensioners shouldn’t be afraid of running out of money or medicine: there are a lot of people who cannot make ends meet with their small pensions,” says Szydlo to nods from the over-60s crowd.

“Those over 75 should get free medicine, they should also have the chance to enjoy culture.” On her campaign, Szydlo likes to tell of her life as a coal-miner’s daughter in the small mining town of Brzecszcze, where she was elected mayor in 1998 aged 35. A decade ago she joined PiS and entered parliament.

Now 52, with her oldest son in a seminary, PiS leader Jaroslaw Kaczynski spotted Szydlo’s potential and let her manage this year’s successful presidential campaign of 43-year-old PiS candidate Andrzej Duda. Now Szydlo is attempting to repeat the success for herself. Stiff on camera, yet empathetic in a controlled way in person, the comparisons with Angela Merkel are inevitable, perhaps intended.

Like Merkel, she rose largely unseen through her party ranks because she favoured “honest work instead of a career with fireworks”. The major difference is that while Merkel shafted her political mentor, Helmut Kohl, before going for power, Szydlo’s mentor is very much politically alive.

Kaczynski took office as prime minister a decade ago and is still remembered for a series of battles he fought: at home, against communists and corruption; abroad with Berlin, Moscow and Brussels.

He lost power after little more than a year. Then in 2010, his twin brother, the president Lech Kaczynski, was killed in a plane crash in Russia.

Aware of his polarising effect on voters, Kaczynski has now taken a backseat. And, as with Duda’s campaign earlier this year, Szydlo’s success hinges on winning centrist voters with milder, conciliatory packaging for the PiS party line: opposition to Poland in the euro and to any EU climate plans that hit Poland’s coal industry.

So what does she say to EU partners who fear a return of PiS to power means a return to the lively days of the Kaczynski era?

“The cooperation between EU and Poland [under PiS] was never complicated,” says Szydlo, in Makow Mazowiecki.

“We defended our interests like every other EU country. I want to stress that EU membership for us is a priority, but we want Poland to be treated as equal partners in the EU.”

Despite her mild exterior, the PiS hopeful isn’t afraid of an occasional swipe at Germany. Describing as “blackmail” Berlin’s demands for EU refugee quotas gave her a noticeable bounce in polls. The current government has agreed to take in 7,000 refugees and Kaczynski set alarm bells ringing in the PiS camp this week.

On Tuesday, in Makow Mazowiecki, he implied refugees were bringing cholera, dysentery and “various types of parasites” to Europe.

“They aren’t dangerous in the organisms of these people but could be dangerous here,” said Kaczynski. “This doesn’t mean that anybody should be discriminated against, but one must check this.”

Opponents pounced on his remarks as the “language of Nazism”. The mask had slipped, they crowed, and Kaczynski revealed himself as the true face of PiS politics. That has awakened memories of a decade ago, when Kaczynski allowed a more moderate PiS candidate to run for prime minister before shafting him to become prime minister himself.

Asked about that episode now, the PiS leader says Szydlo can count on his support “if she’s a good prime minister”. Otherwise, he added cryptically, “the interests of Poland” will prevail.