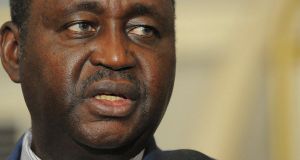 At least six South African soldiers have been killed in clashes with the rebels. A United Nations source said the force, in the country to train the army along with hundreds of regional peacekeepers, was preparing to leave.

The Seleka rebel coalition resumed hostilities this week in the mineral-rich former French colony, vowing to oust Mr Bozize, whom it accused of breaking a January peace agreement to integrate its fighters into the army.

The landlocked country, racked by rural rebellions for more than a decade, has extensive and unprotected borders and the rebel advance added to instability in the heart of Africa.

As the loose coalition of rebels - some of them former rivals - tightened their grip on Bangui, it was unclear who would replace Mr Bozize or whether the power-sharing government of Prime Minister Nicolas Tiangaye would remain in place.

"The rebels control the town," said presidency spokesman Gaston Mackouzangba. "I hope there will not be any reprisals."

Government spokesman Crepin Mboli-Goumba said the Seleka rebels controlled all the strategic locations in the city.

A United Nations official in Congo said Kinshasa's government asked the UN refugee agency to help move 25 members of Mr Bozize's family out of the border town of Zongo.

However, Congo's Information Minister Lambert Mende said Mr Bozize was not among the family members who arrived in Zongo and said his arrival in the country had not been announced to Congolese authorities.

The rebels fought their way to the northern suburbs of the riverside capital last night before an overnight lull in the fighting. But residents said heavy weapons fire erupted across Bangui this morning. .

Rebels broke through a line of South African soldiers during their push into the city.

Around 400 South African troops are currently in the country. Regional peacekeeping sources said the South Africans had fought alongside the Central African Republic's army.

"I cannot confirm that we were fighting alongside (the CAR army) but we fell under attack and we defended ourselves and we repulsed the attackers," South African army spokesman Brigadier-General Xolani Mabanga told private South African news channel eENCA.

A source with the United Nations in Bangui said South African troops were preparing to leave the country. "They took substantial losses and have asked for French support to load their troops and take off," said the source, adding she had heard anywhere between two and 12 South African soldiers had been killed.

France, which already has some 250 soldiers stationed in the Central African Republic, sent in another company of 150 troops to secure Bangui's international airport. France said today it had no plans to send more troops.

Seleka, a loose umbrella group of insurgents, fought its way to the gates of the capital late last year after accusing Mr Bozize of failing to honour an earlier peace deal to give its fighters cash and jobs in exchange for laying down their arms.

The Seleka rebels received several key ministerial portfolios under a power-sharing agreement specified by January's peace deal, and one of their leaders was named deputy prime minister in charge of national defence.

However, rebels and opposition figures accused the president at the time of tampering with the agreed deal to secure important ministerial posts for his loyalists.

The violence is the latest in a series of rebel incursions, clashes and coups that have plagued the country since its independence from France in 1960.