Two sentenced to death in Bangladesh for killing blogger

Ahmed Rajib Haider, who campaigned for ban on Islamist party, was hacked to death 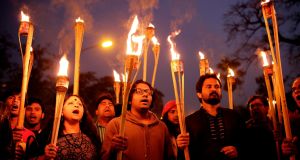 Members of the Gonojagoron Mancha movement shout slogans as they attend a protest rally after the verdict was announced in the trial over the murder of blogger Rajib Haider, in Dhaka, Bangladesh. Photograph: Abir Abdullah/EPA

A court in Bangladesh has sentenced two people to death and jailed six others for killing an online critic of religious militancy in 2013.

They are the first verdicts since suspected Islamist militants began targeting secular activists in recent years.

Seven university students and the leader of a banned Islamist group were charged with murder in the death of Ahmed Rajib Haider, a blogger who campaigned for the banning of the Islamist Jamaat-e-Islami party, which opposed Bangladesh’s independence from Pakistan in 1971.

According to prosecutors, the students said that Mufti Jasimuddin Rahmani, leader of the banned Islamist group Ansarullah Bangla Team, incited them to kill Haider in sermons in which he said all atheist bloggers should be killed to protect Islam.

The two North South University students who received the death sentences included Faisal bin Nayeem, who the court said hacked Mr Haider with meat cleavers in front of his house in Dhaka. Another was tried in absentia.

The others received prison sentences ranging from three years to life. Rahmani was sentenced to five years, according to Judge Sayeed Ahmed, who read the verdicts in a packed Dhaka courtroom in the presence of seven defendants.

Haider’s father rejected the verdicts, saying all the defendants deserved the death sentence. He said he would consult with his lawyer to decide whether to appeal.

Four secular bloggers and online activists, including a Bangladeshi-American, have been killed this year by suspected militants who denounced their writings criticising radical Islam.

Many bloggers have gone into hiding, and some have left the country, as concerns have grown about an increasingly bloody divide between secular activists and conservative Islamist groups.

Police said that the student who was sentenced to death in absentia and was accused of planning the attack is a member of Jamaat-e-Islami’s student wing, Islami Chhatra Shibir, but the party denied involvement in the killing.