Government says police shot and killed 14 after being attacked by mob armed with knives, explosives 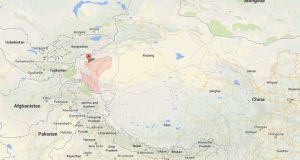 Chinese police shot and killed 14 people during a riot near the old Silk Road city of Kashgar (A on map) in which two policemen were also killed, the regional government said today. Image: Google Maps.

Chinese police shot and killed 14 people during a riot near the old Silk Road city of Kashgar in which two policemen were also killed, the regional government said today.

Police were attacked by a mob throwing explosive devices and wielding knives yesterday when they went to arrest “criminal suspects” in a village near Kashgar in Xinjiang province, the government said on its official news portal.

“Police responded decisively,” the government said in a brief statement, adding that two people had also been detained and that an investigation had been launched.

At least nine civilians and two policemen were killed when a group of people armed with axes and knives attacked a police station also near Kashgar last month, state media has said.

China has stepped up security in Xinjiang after a vehicle ploughed into tourists on the edge of Beijing’s Tiananmen Square in October, killing the three people in the car and two bystanders.

Authorities said the crash was carried out by Islamist militants from Xinjiang plotting holy war, and have reacted angrily to suggestions that it was because of frustration and anger over government repression of the region’s Muslims.

Many of Xinjiang’s Turkic-speaking, Muslim people chafe at restrictions on their culture, language and religion, although the government insists it grants them broad freedoms.

Xinjiang has been the scene of numerous incidents of unrest in recent years, which Beijing often blames on the separatist East Turkestan Islamic Movement, even though many experts and rights groups cast doubt on its existence as a cohesive group.

Many rights groups say China has long overplayed the threat posed to justify its tough controls in energy-rich Xinjiang, which lies strategically on the borders of Central Asia, India and Pakistan.