Assault near Tiananmen Square was ‘carefully planned and premeditated’ 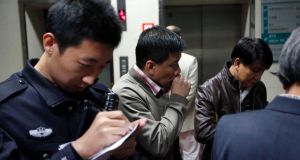 A Chinese policeman takes information from the passports of the family members of Filipino doctor Rizalina Bunyi, who was killed two days ago when a car rammed into a crowd around Tiananmen Square. Photograph: Kim Kyung-Hoon/Reuters

Chinese police have detained five suspected Islamist militants after confirming that a deadly crash on Beijing’s Tiananmen Square on Monday was a “carefully planned, organised and premeditated” terrorist attack.

Beijing police said the SUV that ploughed into a crowd of tourists outside the Forbidden City in downtown Beijing was driven by Usmen Hasan, an ethnic Uighur from the restive western region of Xinjiang.

His wife, Gulkiz Gini, and mother, Kuwanhan Reyim, were with him in the car, which had Xinjiang number plates, along with “devices filled with petrol”, knives and a “jihad” flag, police said.

The assault killed two tourists, one from the Philippines and another from Guangdong province, and injured 40 people.

“With the co-operation of police authorities including those in northwest China’s Xinjiang Uygur Autonomous Region, Beijing police have captured five suspects who had been at large,” a spokesman from the Beijing Municipal Public Security Bureau told the Xinhua news agency yesterday.

‘Jihad’ flag
Police found more knives and at least one “jihad” flag in the temporary residence of the five detained suspects, Xinhua reported.

According to the spokesman, they admitted that they knew Usmen Hasan and conspired to plan and carry out the attack. They said they had not expected the police could capture them only about 10 hours after the incident.

The reaction on Sina Weibo was forthright in its support for the police.

Peng Yuan wrote on the Twitter-like service that the Chinese police had done “a great job in cracking down these terrorists”.

“We will not allow any behaviour that harms national interests, undermines social stability and harmony. We will not compromise towards terrorism,” wrote the commentator.

Lan Xiaomao said people should “strongly condemn these bastards who harm innocent people and turn their life dark. How cruel and cold-blooded.”

The main exiled Uighur group, the World Uyghur Congress, said a lack of transparency in China meant there would only be one side of the story given and said it feared the response to the incident would lead to “further demonisation” of the Uighurs.

“The Chinese government will not hesitate to concoct a version of the incident in Beijing, so as to further impose repressive measures on the Uyghur people. Chinese officials commandeered the war on terror for its own cynical purposes to justify harsh measures against the Uyghurs,” World Uyghur Congress president Rebiya Kadeer from Washington DC.

Separatist movement
A simmering separatist campaign in the region has occasionally boiled over into violence over the past 20 years, although the unrest has never before spilled over into the nation’s capital.

In July 2009 local Uighurs turned on Han Chinese in Urumqi – which led to deadly reprisals by Han on Uighurs a few days later. The riots killed nearly 200 people, mostly Han Chinese, and left more than 1,700 wounded. Uighurs are not known to have previously carried out any suicide attacks.

Beijing blames separatist Uighur Muslims from the East Turkistan Islamic Movement, who it says trained in militant camps in Pakistan, and it says the militants are trying to introduce an extreme form of Islam.