Change won’t lead to baby boom, but may help to reverse shrinking workforce 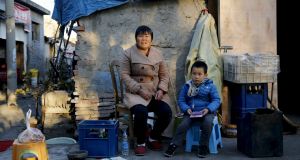 Migrant worker Huang Feng (52) with her grandson. She welcomed the decision to drop the one-child policy. Photograph: Kim Kyung-Hoon/Reuters

The Chinese Communist Party’s decision to replace the one-child policy after more than 30 years and allow people to have two children instead probably won’t lead to a baby boom, but it may stimulate some parts of the economy and marks an advance for civil rights in China.

Ireland could benefit directly from the change in the party’s five-year plan as it is the second biggest exporter of infant formula to China.

One of the greatest experiments in social engineering ever, the policy dates from an era when China was a poor place. When the then leader Deng Xiaoping introduced the concept in 1976, it was never meant to last forever.

The National Population and Family Planning Commission estimates that about 400 million births have been prevented by the programme.

Population growth has been curbed, and the projection of demographics has long indicated that it was time to end the policy, or risk a shrinking workforce in the next 20 years.

“The facts prove that people are widely involved in the process of policymaking. Every individual has the right to discuss national policies. The five-year plan was laid down by both the elite and the grassroots.”

Credit Suisse reckons the new policy will lead to three to six million additional babies a year in the five years from 2017. “This means a population boost of 17-33 per cent from the current 16.5 million newborn babies per year, bringing the annual newborn back to the 1990s level,” it said.

The main aim of the policy is to kick-start the flagging economy and avoid a rapidly greying society by encouraging people to have more children. China’s labour force reached a peak of 940 million in 2012, falling to 930 million in 2014, and it is forecast to fall by about 29 million by the end of the decade.

Lu Jiehua, a sociologist with Peking University, believes that in the short term, being able to have two children will benefit about 100 million families.

The one-child policy has played a key role in some of the biggest stories in China in the last three decades.

Last year, film director Zhang Yimou paid €1.1 million in fines for having two more children than allowed under the policy with his wife Chen Ting. Two years ago, government officials were punished after a woman in Shaanxi province was forced to abort a seven-month-old foetus. Feng Jianmei was abducted from her home by five men from the local family planning clinic in the township of Zhenping and forced to undergo an abortion.

It has always been a mixed bag of measures – people from ethnic minorities are exempt, while farmers who have a girl first are allowed have a second offspring.

The process of abandoning the one-child policy started as a trial programme allowing parents who are both single children to have a second child. In 2014, this was expanded to cover families in which either parent is a single child. Over the years, some people have chosen to pay the fines. These vary, but they can often be one fifth of a couple’s yearly income; they can also lose privileges and education rights for the child.

Euromonitor’s Shanghai-based research manager Joy Huang said the policy would boost the birth rate overall, but not by that much.

“The high living cost is the main reason standing in the way of couples having a second child. Chinese parents would choose the best baby products they could afford for their children, hence, baby products account for a big part of the family cost,” said Huang.

“Also in Chinese tradition, parents would help to buy a house for their children, but with the real estate price soaring in China, it is already a big struggle for people to buy one house, not to say to buy another one for the second child.”