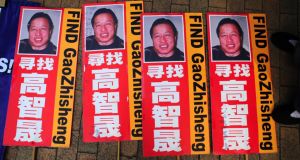 Placards featuring the photograph of jailed Chinese human rights lawyer Gao Zhisheng lie on the ground in front of a police station in Hong Kong in 2011. Photograph: Antony Dickson/AFP/Getty

One of China’s most prominent human rights activists, Gao Zhisheng, has been released after three years in jail, activists reported yesterday, although it remained unclear whether he will be subject to restrictions on his freedom.

Mr Gao is best known for his work defending Falun Gong adherents, Christians, farmers with land disputes and other persecuted social groups in China, which led to his law firm being shut and his licence to practise revoked.

It’s not clear whether Mr Gao will enjoy genuine freedom, or if there are any conditions on his release.

The Beijing-based rights defender Hu Jia said he believed the authorities would “want to try to silence him”.

Mr Hu told the China Human Rights Defenders group that he had spoken with Mr Gao’s brother, who told him that Mr Gao’s teeth were ruined, and that they would seek medical treatment in Urumqi for a few days and then head back to their home village in Yulin, Shaanxi Province.

Mr Gao was first detained in August 2006, then again in December of that year, when he was given three years in prison on probation for five years on charges of “inciting subversion of state power”.

He was in and out of detention while on probation, and he was arrested again in early 2009, then released briefly in 2010. After he was released he claimed he had been tortured with electric prods during his detention, and he disappeared again shortly afterwards while visiting his in-laws in Xinjiang province.

In December 2010, the Chinese state news agency Xinhua said he would be jailed for three years for violating probation rules. The European Union, the US and United Nations had repeatedly called on the Chinese authorities to release him.

Mr Gao’s relatives were allowed to see him just twice in three years, in March 2012 and January 2013. Mr Gao’s wife, Geng He, has asylum in the US where she lives with their two children, aged 21 and 11. The family had not been in touch with Mr Gao for many years.

Ms Geng said she believed her husband had been tortured while in prison, and that she had spoken to her husband briefly but he appeared to be under surveillance, and her phone call with her husband was cut off after a brief time.