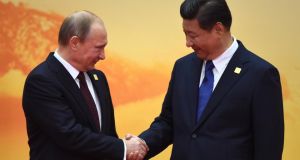 Russia’s president Vladimir Putin with China’s president Xi Jinping: China and Russia will mark their growing closeness with a series of high-level exchanges in coming months, including military parades and joint commemorations of the 70th anniversary of the end of the second World War. Photograph: Greg Baker/AFP/Getty

China and Russia will celebrate their growing closeness with a series of high-level exchanges in coming months, including military parades and joint commemorations of the 70th anniversary of the end of the second World War.

The focus of this is the warm relationship between presidents Xi Jinping and Vladimir Putin, and is a reminder to Japan, which is close to the US and has long been the regional dominant, that China is gaining in authority.

Diplomats from both countries have outlined their plans for the commemorations over the past few days. While they have stressed they were not targeting Japan, there is no doubt that the next few months will prove a testing period in the volatile Sino-Japanese relationship.

“Both Russia and China hold responsible positions and are efficient at co-ordination in the most complicated world issues, and that has made our co-operation an important part of international relations,” according to the Russian ambassador to China, Andrey Ivanovich Denisov.

Tensions between Japan and China over disputed islands in the East China Sea and Tokyo’s perceived failure to properly atone for second World War atrocities have been the defining Asian conflict of the past few years.

While many in the West hope that President Xi will find inspiration in the democratic models offered by President Barack Obama or German chancellor Angela Merkel, for him Mr Putin is a more palatable role model.

Many Chinese, particularly among the leadership, feel democracy has been badly tarnished by the wheeler-dealing in America’s legislative system, by a failure to deal effectively with an Islamic fundamentalist threat, by the revelations about National Security Agency spying and by Europe’s general timidity on dealing with economic woes and regional conflicts, including Ukraine.

Mr Putin, however, stands up to the United States, his rule has a vivid authoritarian stamp and he wants his country to be perceived as strong and influential. And he never asks about China’s human rights record or path to democracy.

China’s growing economic power has been matched by a desire to have a more defining role in regional affairs – political, economic and, increasingly, military. China is particularly irked by visits by Japanese prime minister Shinzo Abe to the Yasukuni Shrine in Tokyo, which honours 2.5 million Japanese war dead, including war criminals.

The gaze towards Russia has become frequent.

In an article about Ukraine on the Xinhua news agency, the story quoted Andrei Zolotarev, an analyst at the Kiev-based think-tank Third Sector, which appears to be very pro-Moscow and Beijing, as saying: “One year later, we can say that the protests did not achieve their goals. Although the faces have changed, the system is still the same.

“The situation in the country is deplorable. Ukraine is now in a de-facto state of war. The economy is on the verge of collapse. Consequently, people’s incomes fell dramatically and the situation in the social sphere remains in shambles,” Mr Zolotarev said. He added that Ukraine should learn from China’s experience during the process of reforms.