At least 22 die in Bangladesh stampede 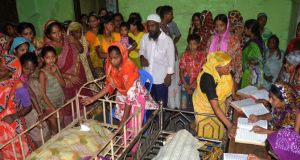 Bangladeshi relatives surround the bodies of some of those killed in a stampede at a charity distribution event in Mymensingh. Photograph: Strdel/AFP/Getty Images

At least 22 people have been killed in a stampede during a charity handout during the Muslim holy month of Ramadan, police in Bangladesh said.

Police officer Kamrul Islam said another 30 people have been injured early today in Mymensingh, a town north of the capital, Dhaka.

Mr Islam said hundreds of people had gathered outside the home of a local businessman and they stormed in when the gates were opened to collect free clothing.

Stampedes are common at religious places and during charity handouts in South Asian countries.