Ghandi Mallak: When I got my citizenship I was more than 40. My life is behind me now 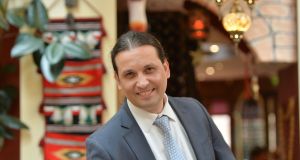 The first time Ghandi Mallak applied for Irish citizenship his application was turned down without explanation.

Mallak and his wife had been granted refugee status just six months after arriving in Ireland in late 2001. While his wife was later granted citizenship, the law graduate from Damascus would have to wait more than a decade before he could finally call himself an Irish citizen.

“I will always respect this country that gave me safety, allowed me to earn money and allowed me to raise my kids and send them to a decent school. At the same time, I will never forget the suffering of my experience of getting citizenship.”

Mallak sits behind an ornately designed marble desk piled with books and papers in a poky office at the back of his restaurant on Dublin’s Camden Street.

“People were lovely when I arrived here but they didn’t know where Syria was unless I mentioned Lebanon or Israel or said ‘the Middle East’,” explains Mallak, adding that he never planned on moving to Ireland.

He and his new wife didn’t have a choice when they paid a smuggler to get them out of the country. “It could have been Holland or France, it just happened to be Ireland.”

Mallak was born and grew up in the al-Yarmouk Palestinian refugee camp on the outskirts of Damascus. He says his family were forced to move to the camp following his father’s involvement in the 1963 coup d’état which was ultimately overthrown.

While al-Yarmouk later developed into a bustling city district, Mallak lived in a camp with very basic facilities.

“There was no drainage, no running water, no electricity. I remember, until the age of eight, our kitchen didn’t have a roof and our mother used to clean dishes under the rain.”

His father became a respected member of the camp after he and Mallak’s uncle managed to arrange electricity and running water for the area. They also set up its very first school. “My father was considered almost a hero, there was a street named after him.”

Growing up in al-Yarmouk, Mallak and his siblings mixed with followers of communism and began reading Karl Marx, a move which made his parents very uncomfortable.

Mallak left home as a teenager, determined to make his father proud.

“National service is an obligation and my father gave me a clip on the ear, dragged me from my work and said he wanted me to be a man and get my national service out of the way. I needed to prove to him I wasn’t a loser.”

Unbeknown to his father, or the military, Mallak was also studying drama at university and would often sneak into central Damascus to meet up with his Muslim girlfriend.

Soldiers were entitled to study science or medicine but not arts subjects which were connected to a different government department. When the university discovered their drama student was also a soldier, Mallak was kicked out. He was also arrested a number of times for his involvement in the Communist Party and decided to leave the country, fearing for his safety.

Before leaving, Mallak’s mother told him she had always dreamed her son would become a lawyer.

A few years later, Mallak returned to Syria, confident his parents would feel proud of their son. “I now had a degree in law but I didn’t stay long. My family didn’t take me on, the country didn’t take me on and the police were looking for me again.”

Determined to overcome the restrictions imposed by his faith and marry his girlfriend, Mallak converted to Islam and the couple paid a smuggler to get them out of the country.

They arrived in their new Irish home at the end of 2001. Soon after, they were granted refugee status, they applied for citizenship but were refused on the grounds they were not resident in Ireland long enough. Mallak applied again and, while his wife was granted citizenship, he was refused. Mallak would spend the next 10 years fighting to become an Irish citizen.

Without a Syrian passport and only carrying a temporary UN travel document, he was effectively stateless.

After his application was refused without explanation in 2008, Mallak brought the case to court. “At that time I was more than five years in the country. I had built a life, I’d bought a house, I was working and raising two sons. Every time we went abroad, my kids would see me argue with immigration officers in order to get back into Ireland. I’d lost my civil rights to go back home to Syria. Ireland was my only home, my only destiny.”

The Minister for Justice’s refusal to grant him citizenship was finally overturned by the Supreme Court in December 2012.

But, after years of fighting for State recognition, Mallak’s personal life had fallen apart. “I fell out with my wife over the stress of the Supreme Court. It consumed my social life, emotions, relationship – it ate me up inside.”

When his marriage split up, he was given limited access to his two sons. “I wasn’t allowed to see my kids and was left homeless. I had to sleep here on this construction site,” he adds, pointing to the glass extension of his restaurant.

Nearly three years later, Mallak now has Irish citizenship and runs a restaurant. But he still only sees his teenage sons twice a week. Asked how he feels after more than a decade of legal battles, Mallak says it’s “too little, too late. When I came to Ireland I was under 30. When I got my citizenship I was more than 40. My life is behind me now, can you give me those years back”?

Despite these obstacles, Mallak is very grateful for the safety of his Irish home as the Syrian civil war has intensified. “Ireland took me on when my own country didn’t take me. Ireland is a safe place and is very decent.”