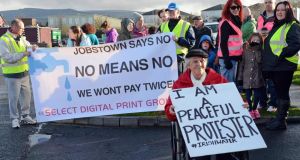 Kids’ face-painting, live music and free soft drinks were among the attractions at an anti-water charges protest in Jobstown, west Dublin today.

Organised by the local community, the event attracted about 200 people beginning with a march from Jobstown green, past a number of housing estates including Killclare, Glenshane and Bawnlea and back to the green.

The march was headed up a wide banner, with the slogan ‘Jobstown says no, no means no, we won’t pay twice.’

Others placards had such slogans as ‘Labour traitors, no way, we won’t pay’ while marchers delivered chants including, ‘Denis O’Brien, hear us clear, we don’t want your meters here’ and ‘Enda Kenny, not a penny’.

The march stopped briefly en route at the An Cosán centre, scene of angry protests last weekend where the Tánaiste and Minister for Social Protection Joan Burton was hit by a water balloon and trapped inside her car for over two hours.

Ms Burton had been attending a graduation ceremony. Commentators described the ensuing protest as a “travesty of democratic action” and the protestors as a “baying mob”.

Local councillor Louise Dunne (Sinn Féin), who was among those graduating last week, said the people of the area has been “represented inaccurately” by some media and political commentators.

“There is a fantastic community spirit despite the fact some of the most deprived, vulnerable communities in the country are here. People here feel they are totally ignored by establishment politicians, that they have been hit with years of austerity and that people like Joan Burton think they can just throw another €5 on the Child Benefit and all will be forgiven.They have no idea.”

Ms Dunne said her class had objected to the Tánaiste being invited to the graduation ceremony but were told if they objected they could receive their degrees in absentia. “That was not acceptable. It was our day after three years’ hard work. It was not Joan Burton’s day.” She and a number of others accepted their degrees but declined to be photographed with the Tánaiste. Instead they left “to go outside and stand with the people of Jobstown”.

Also at last week’s and today’s protest was Kay Keane, a woman in her 50s who lost her job as a machinist five years ago. Her husband lost his job at the same time. They have a combined income now of €317 a week. They have an 18 year-old son still at home and another son and his wife are moving in after Christmas as their rent is increasing beyond what they can afford. “There is just no money left after food and bills. Nothing.”

Jobstown is described as “very disadvantaged’ by Pobal, the not-for-profit body that manages funding programmes for Government. The area is characterised by high unemployment, high number of families headed by single parents, low levels of third level education and more than half the households in social housing.

Today’s event, said local TD Paul Murphy (Anti-Austerity Alliance), was called by the residents to “show everyone the people of Jobstown are not the thugs some in the media would have people believe”.