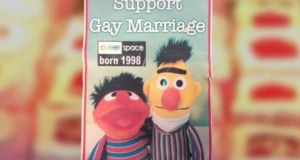 The North’s Equality Commission is taking a civil action against Ashers Baking Company in Northern Ireland for refusing to bake a cake for a customer promoting same sex marriage, it has confirmed.

The commission in a letter to the company which employs 62 people said it would initiate legal proceedings against Ashers unless it acknowledged that it was in breach of equality legislation and unless it paid compensation.

Ashers in turn accused the Equality Commission of engaging in a “David and Goliath” action against the company because as a Christian bakery it “in conscience” would not bake the cake for a customer.

In July the commission warned the bakery that it could face prosecution after it refused an order for the cake which was to feature the Sesame Street puppets, Bert and Ernie with their arms around one another.

The slogan on the cake was to state “Support Gay Marriage” and feature the logo of “Queerspace”, a gay, bisexual and transgender volunteer organisation based in Belfast.

At the time Ashers’s 24-year-old general manager Daniel McArthur said they were happy to bake cakes for anyone, but could not fulfill that particular order as it clashed with the ethos of the business. “We thought that this order was at odds with our beliefs, certainly was in contradiction with what the Bible teaches,” he added.

Mr McArthur, who is supported by the British Christian Institute, said in response to the threatened civil case that Ashers will continue to take a stand on the issue. “We feel that the Equality Commission are pursuing us because of our beliefs that marriage is between a man and a woman,” he said in a statement through the institute.

“It feels like a David and Goliath battle because on one hand we have the Equality Commission who are a public body, they’re funded by taxpayers’ money, they have massive resources at their disposal whereas we are a small family business and we have limited resources at our disposal,” he added.

“We’re continuing to hold to the stand that we took originally because we believe it’s biblical, we believe it’s what God would want us to do, and we also think that if we do cave in to the Equality Commission at this point it’ll put pressure on other citizens who are defending their view of traditional marriage,” said Mr McArthur.

“We don’t want to be forced to promote a cause which is against our biblical beliefs. We’ve had a lot of support from people who disagree with our stance on same-sex marriage. They think that we should have the freedom to decline an order that conflicts with our conscience.”

Simon Calvert, a spokesman for The Christian Institute, said: “It is simply baffling for a body supposedly working for equality to be threatening a Christian family, all because of a cake.

“The Equality Commission has taken four months to dream up new grounds on which to pursue the McArthur family, claiming that they’ve breached political discrimination laws,” he added.

The commission said it “would prefer not to have to litigate” and that the customer would “be seeking only modest damages for the upset and inconvenience caused”.

It added that the case “raises issues of public importance regarding the extent to which suppliers of goods and services can refuse service on grounds of sexual orientation, religious belief and political opinion”.

Ashers, which was established in Newtownabbey on the outskirts of north Belfast in 1992 has six shops. The company is named after a verse from Genesis in the Bible which says, “Bread from Asher shall be rich and he shall yield royal dainties.”