Head of Garda Racial, Intercultural and Diversity Office says culture had to change 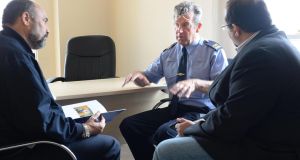 It is 9.53am on Monday, October 21st, and an email with the subject line “Suspected Child Abduction” has just landed in the inbox of the Missing Persons Bureau at Garda Headquarters.

The email is from a woman who writes that at a festival in Co Clare in July, she became “preoccupied” with a little baby from a Roma family.

“He had very blond hair and the bluest eyes and his complexion was also fair,” she says. “Apart from the baby, all the others were completely dark in complexion, eyes and hair.”

She says recent reports of the blonde and blue-eyed “Maria” who was taken from a Roma settlement in Greece over child abduction fears have made her realise she “should have reported it”.

Following Garda inquiries and some basic checks at the Roma family’s home in Athlone, section 12 of the Child Care Act is invoked and gardaí take custody of the two-year-old boy.

Ombudsman for Children Emily Logan said in her report published this week there was “no objective or reasonable justification” for the move and it effectively amounted to “ethnic profiling”.

“We won’t tolerate discrimination and our office is here to make sure police officers don’t discriminate in the course of their duty,” says Sgt Dave McInerney, the head of the Garda Racial, Intercultural and Diversity Office, in an interview with The Irish Times.

His office is tasked with ensuring gardaí carry out their duties without any form of discrimination or ethnic profiling, as well as providing expertise on migrant cultures to gardaí investigating crimes in or involving those communities.

Since the Roma controversy, the force has introduced anti-discrimination training that provides anti-profiling techniques designed to “challenge attitudes” within the ranks.

Sgt McInerney says racism “absolutely” permeates every sector of society and the pressure on gardaí to garner results can feed it. “The police are under serious pressure to get results, solve crimes, and they can take shortcuts,” he says. “You can’t do that. We’ve moved on now from that. That was the past.

“After September 11th, I remember ringing the mosque and telling them ‘You’re now a vulnerable community. Can we increase patrols around the mosque to make sure you don’t get any grief from this? Tell us if you get hate calls.’

“The pitfalls would be that these people could be stopped, they could be searched, treated as suspects – the whole community. That had to stop. It’s what destroys policing. It just ruins us. We’re here to make sure police aren’t motivated by the media, by stereotypes, by prejudices.

“There can be pressure but if it’s a proper, trained police force that respects human rights and treats the population with respect, that won’t happen. They will go for the individual. They won’t target the community. If they pick on a community, they destroy any hope of the investigation and any relationship that has been built in the past. It’s amazing how one police officer with a bad attitude or prejudice can ruin an organisation very easily by targeting a community or acting in a bad way,” he adds.

“A police officer can actually radicalise individuals if he or she acts in a discriminatory manner. It can’t be tolerated and it won’t be tolerated.”

The classes attended by Garda ethnic liaison officers to combat these issues typically involve a “cross-exchange” between gardaí and representatives of minority groups.

“I would bring in the imam of the mosque to talk about what they think of the police and how they work with them,” says Sgt McInerney. “They come down and talk about what it’s like to be different, have they any issues with the police. This is real training. It’s not like learning from a book.

“We also listen to the police about their experience of working with minorities. What do they come across? What happens when they meet a Roma on the street or when they stop a car and there is a female with a hijab? How do they deal with this?”

Sgt McInerney says it involves challenging racism in the workplace to deal with it is by challenging attitudes. “I’m challenging the profile of minorities in people’s minds .“ However, for gardaí, it can be difficult “because we are working with minority communities who may be engaged in crime so you have to be very direct in your training approach.”

The ethnic liaison officers work in the communities and assist gardaí in the carrying out of their duties without causing offence to minorities. “They might need help about understanding what to do when they visit a mosque or when they visit the home of a Muslim or a Traveller halting site,” says Sgt McInerney.

“People look at the negative elements. Our role is to go there, meet the police teams, the investigation teams, the search parties, the custody teams, and tell them what they need to know about the Islamic community. When we go to search a house, this is what we do to respect their differences.

“It’s about negotiating how they think,” he says. “Their various mannerisms, how they do things, their time-keeping, what sort of drugs do they normally take, what sort of crime do they prefer. It’s amazing how some people have a certain modus operandi and they can’t change it. Some communities because of the countries they came from are prone to certain types of crime.”