Ban on surrogacy in Ireland urged by campaigner 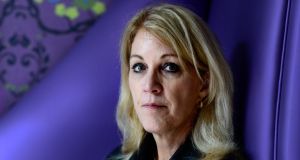 Jennifer Lahl: “I know women who were surrogates for family members who don’t even speak to each other anymore.” Photograph: Cyril Byrne/The Irish Times

Surrogacy should be banned in Ireland as it exploits women and “commodifies” children, a campaigner has said.

Jennifer Lahl, founder and president of the Center for Bioethics and Culture in California, spoke in Dublin on Tuesday night at an event organised by the Iona Institute, which is also campaigning against surrogacy.

Surrogacy is where a woman carries a pregnancy to term for a couple or individual who cannot themselves.

Surrogacy is not illegal in Ireland but remains largely unregulated. It can be fraught with legal difficulties, particularly if a couple wishes to bring a baby into Ireland that was born to a surrogate abroad, or around establishing legal custody if parentage is disputed after birth.

Calls for legislative clarity have been made by among others, Chief Justice Mrs Justice Susan Denham and groups such as Families Through Surrogacy. The Government has indicated it intends to legislate on assisted human reproduction issues.

Ms Lahl, also a founder of the Stop Surrogacy Now campaign, says the practice is unsafe for women, exploitative and damaging to their mental health. In many cases it deprives the children of a “natural parentage” while turning them into commodities.

She has interviewed women who have been surrogates – some for family members, some for strangers, some for payment and some for none.

“And all of them had horrible outcomes. Families broke down. I know women who were surrogates for family members who don’t even speak to each other anymore. There’s tension. There’s guilt. There’s resentment. There can be horrible custody battles. It’s muddy.”

Ms Lahl said she does not “buy” the argument that some surrogates lift themselves and their families out of poverty, asking why people who argue this do not campaign for decent basic incomes for all women.

“I’m all for lifting people out of poverty, but not using their body for gain and then saying, ‘I feel so good about myself’.”

Many couples and individuals are “desperate” to have children, but she said, surrogacy is “not good medicine” and there should be “limits” on what people are allowed to buy and what risks vulnerable women are allowed to take.

Earlier this month the Council of Europe rejected a proposal to regulate surrogacy which would in effect have legalised it, while in December the European Parliament approved a report condemning surrogacy.

In August, India announced plans to outlaw commercial surrogacy and surrogacy between non-family members. It also is banned in France. Ms Dahl says Irish politicians should follow their lead.