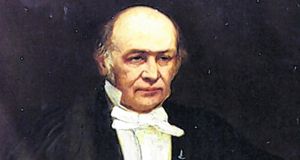 It’s one of the most famous flashes of inspiration in mathematics: on a fine October day in 1843, Irish mathematician William Rowan Hamilton was walking from Dunsink Observatory to the Royal Irish Academy when he suddenly saw an answer to a problem he had been thinking about.

To make sure he wouldn’t forget, he scratched a mathematical formula into Broome Bridge at Cabra and created quaternions, a new type of four-dimensional number.

Quaternions went on to contribute to the discovery of electromagnetic waves and radio communications, says mathematician Dr Fiacre Ó Cairbre from Maynooth University.

He is organising this year’s Hamilton Walk to celebrate that fateful stroll and etching. “It was one small scratch for a man, one giant leap for mathematics,” says Ó Cairbre, who notes that quaternions are still used today in computer animation and space navigation. “Whether it is going to the moon or the surface of Mars, quaternions are used to compute the correct orientation of the craft.”

The annual Hamilton Walk typically attracts more than 150 people who retrace the mathematician’s steps along the Royal Canal.