Weighing up a life in the priesthood

Vocations co-ordinator says there has been an increase in inquiries 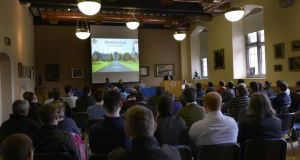 
There was a sense of deja vu for Michael Byrne when he attended the seminary open day in St Patrick’s College, Maynooth, yesterday. In 2009 the then 19 year old from Donaghmede, Dublin, attended the event. Like some at yesterday’s open day, he didn’t tell his family. “I didn’t want them to know. It was a very nervous time.”

More than 50 people attended yesterday’s open day to look at a day in the life of seminarians, listen to testimonials from priests and ask questions. Many of the men, aged from early 20s to late 40s, came alone but a few were accompanied by parents.

Michael says he loved everything about the open day. “It helped me to decide to say, yes, I’m going to apply,” he recalls. “I could see myself studying here and being a part of the community. It just blew me away.” He is now in his second year in St Patrick’s College.

“I’m very happy here. It can have its tough days but the better days come more often than the others,” he says.


Happy
“I don’t take anything for granted. I don’t say I’m definitely going to be ordained in a couple of years. But it’s wonderful, waking up every day as a part of the community. It sets a real sense of where God is in your life.”

Celibacy is often cited as a major deterrent to becoming a priest but he says he doesn’t worry about that.

“I worry more about being perfect because we are all called to be perfect and that’s all I try to do.”

Some 61 men are studying in the seminary, nine of whom are first-year students.

The trend is up and down but national vocations co-ordinator Fr Willie Purcell believes change is on the way.


Social media
“There is a turnaround happening and I think that people now are beginning to not just question but also to discern more, in relation to whether they have a vocation or not. There has been a lot of interest shown in social media – particularly Facebook and our own national website [vocations.ie].”

Fr Purcell is also getting inquiries from people who, many years ago, would have thought about a vocation but put it to one side to follow other paths. “But that vocation will always come back and hit you.”

He believes the election of a new pope will encourage more people to think about their vocations. After a difficult decade for the Catholic Church, he is very hopeful for the future.

“In fact I have never been more optimistic in my life in relation to vocations to the priesthood,” he says. “I’m really excited about it.”