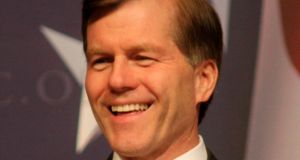 Governor of Virginia Bob McDonnell played up his Mayo connections in his letter to Taoiseach Enda Kenny.

The governor of Virginia has written to Taoiseach Enda Kenny urging him to reject proposals to introduce plain cigarette packaging.

In a letter three days ago, Governor Bob McDonnell said there were other proven ways to regulate the industry based on “sound science” and without undermining “the great Irish business environment”.

The governor’s letter seen by The Irish Times made the case that both he and Mr Kenny had a mutual interest “in fortifying our economies” and said the initiative may undermine Ireland’s reputation as a country in which intellectual property rights are fully protected.

The intervention of the governor, whose state is a major centre for the tobacco industry, marks an escalation of US lobbying against plain packaging.

Four senior congressmen wrote six weeks ago to Ireland’s Ambassador to the US, Anne Anderson, urging the Government to scrap the proposal.

The signatories included Bob Goodlatte, chairman of the House of Representatives judiciary committee, as well as Howard Coble and Tom Marino, chairman and vice-chairman of the subcommittee on courts intellectual property and the internet.

“We are increasingly concerned that the Irish parliament may mandate plain packaging of tobacco products,” they wrote.

“The US and Ireland are friends and strong trading partners. We encourage your government to consider more effective ways to regulate tobacco that do not jeopardise intellectual property rights.”

Mr McDonnell of Virginia played up his Mayo connections as he urged Mr Kenny to reject plain tobacco packaging.

“I bring you greetings from the people of Virginia,” he wrote last Tuesday. “I have enjoyed our several meetings in Dublin and Washington to share stories as sons of County Mayo!”

He argued that the packaging proposal will be very harmful to certain businesses and farmers in Virginia, without naming any. Again without naming anyone, he said “I have recently been briefed” on the proposal and said it may affect Ireland’s reputation as a country where intellectual property rights are fully protected.

Mr McDonnell, a Republican, leaves office next month at the end of a term blighted by controversy over his family’s receipt of lavish gifts from a businessman.

Once a rising star of the party, last July he repaid a wealthy donor more than $120,000 in loans to his wife and a business he owns with his sister.