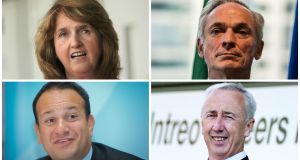 Taoiseach Enda Kenny has told Fine Gael TDs to ignore speculation about the timing of the general election but did not rule out a November poll.

Mr Kenny told his parliamentary party there was still work to be done before the election, such as selling the merits of the capital plan and budget to voters.

One deputy present at the meeting said Mr Kenny told Fine Gael politicians that the election will “happen when it happens”.

“He didn’t say when that would be,” said the TD, who added that Mr Kenny could have shut down speculation on a November poll if he wanted.

Mr Kenny has repeatedly stated that his intention is for the Coalition to complete its term and hold an election next term but many political parties are preparing for a November election.

A number of senior Ministers on Wednesday moved to try and quash growing speculation that the general election may be held in November.

Ireland’s EU Commissioner Phil Hogan is one of a number of senior Fine Gael figures in favour of a November election.

Labour leader and Tánaiste Joan Burton said on Wednesday she believed the election would be held next year and said, as far as she was aware, this was the Taoiseach’s position on the issue.

“We stay the course. We have a lot of lifting to do,” she said.

Her stance was echoed by Minister for Health Leo Varadkar who said he was planning for an election early next year.

“The Taoiseach has said the election will be next year and that’s what I’m working towards,” the Minister said on Wednesday.

He said while there were arguments “both ways” in relation to an autumn election, he was not ready for one before Christmas.

Minister for Foreign Affairs Charlie Flanagan, on a visit to Washington on Wednesday, said he would prefer the general election to be held in the early months of next year so the benefits of recovery are felt “in every kitchen, in every house in the country”.

“My preference is for next February, March - ultimately this is a matter for the Taoiseach to decide,” said Mr Flanagan, noting the critical issue of talks on Northern Ireland were still outstanding.

Labour party Minister of State at the Department of Social Protection Kevin Humphreys said: “I don’t see an election in November” but added his party would be ready whenever it was called.

“It’s been a partnership Government and I fully expect that this Government will run full term,” Mr Humphreys added.

“It’s been mentioned by the Taoiseach on a number of occasions that the election will be in the spring of next year and I confidently expect that we will run full term.”

“We’ll be prepared for any election whenever it comes. All parties I think at this stage are in preparation but we’re expecting a spring election and I don’t see an election in November,” Mr Humphreys said.

Meanwhile, Minister for Jobs Richard Bruton said the Government’s agenda was full until 2016.

“I think the Taoiseach has said time and again that he is going to go the distance. We have a budget to put in place. We have an action plan for jobs 2016 which we are currently working on,” Mr Burton said.

Earlier, Minister of State at the Department of Finance Simon Harris said all political parties were stepping up their election preparations amid a spate of rumours the poll would be held in November.

However, Mr Harris said he expected the Coalition to continue its office until next year.

Speaking to The Irish Times ahead of his address on procurement to the PAI conference in Dublin on Wednesday morning, he said: “The Taoiseach was quite clear yesterday that he expects to call an election next year.

“But it’s fair to say all political parties are stepping up their preparations for the election.

“Regardless of when the election is I’m very much looking forward to the campaign which will apply extra scrutiny to the Opposition and any potential alternative government that they might form.”

He said this had not happened to date.

Minister for Finance Michael Noonan is believed to share the view that the best time for the Coalition to go to the country would be shortly after the budget on October 13th.