Party open to serving in government, could reach ‘over 3% nationally’, says co-leader 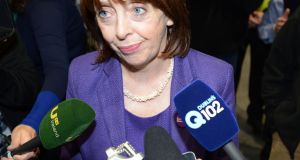 Social Democrats co-leader Róisín Shortall has indicated she is open to serving in government and said it is a “very good day” for the new party.

Speaking at the Dublin city count centre in the RDS, Ms Shortall said the Social Democrats the could reach over 3 per cent nationally.

She said it looked as if her fellow co-leaders Catherine Murphy and Stephen Donnelly will be comfortably elected, with Ms Shortall certain of a seat in Dublin North West.

“We are very pleased,” she said. “It has been a very good day for us considering the party is only in existence for seven months. We have been running this campaign on an absolute shoestring.

“It is looking like we have broken 3 per cent nationally. Hopefully it will work out like that.”

Anything more than three seats would be a bonus, she said, adding the party is open to go into government.

“We said we were campaigning on our policies and we would pursue those whether we were in government or opposition. This is a long-term project as far as the Social Democrats are concerned.”

She said it looked like a “bad day” for her former colleagues in the Labour Party.

“It is looking like a bad day and certainly on a personal basis I feel sorry for anyone who has a personal showing.

“There’s going to be a lot of tears this evening right across all the parties because there has been such a shake up in Irish politics,” she said.