Meet the Voters: ‘Parties have fantastic ideas about health, but no plan for how to pay for it’ 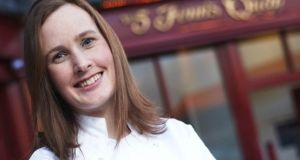 Kate Lawlor: ‘The Social Democrats and People Before Profit are performing very well online, they have captured people’s attention. That makes me think, is it time for a change?’

There has been a strong focus on the health service in the campaign so far, which is good, because it is getting worse. I agree with Joan Burton that we have an ageing population and that’s getting harder to deal with.

All parties seem to have fantastic ideas about what should be done with the health service, but no plan for how to pay for it.

Sinn Féin is saying they will put it in our taxes, but won’t tell us how much we’ll be taxed.

Enda Kenny seemed very honest and open about what needs to be done. He said it would cost money. As much as I would like to go for a new party to introduce a bit of life into our Government, Fine Gael are trying to get [the economy] sorted and I thought Enda was the most credible during the debates on the financial side of things.

The Social Democrats and People Before Profit seem to have clear ideas, but my major concern is whether they have done their sums correctly. Fianna Fáil seems to have forgotten about the crisis entirely, and that they were in power during it.

I spend a lot of time in my business so I haven’t engaged with many of the candidates in person.

But I have watched the debates and I’m following the campaign on social media. I see a lot of sponsored posts on Facebook from the bigger parties.

The Social Democrats and People Before Profit are performing very well on social media, they have captured people’s attention. That makes me think, is it time for a change?

Over the next week I want to see some concrete evidence of where the money is going to come from to cut water charges, for example, or to justify the other promises that have been made.

All parties have said they are going to support SMEs. But the three main leaders seemed to take a step back on this issue during the leaders’ debates. They kept saying they have training programmes, and they have already done this and that.

But there are no backup plans for people who have managed to survive the recession but are probably in a lot of debt, like myself. The minority parties seem to be more in touch with what is going on, and are more willing to help small business owners. This is all good in principle, but again, where is the money going to come from?

What it comes down to is, do we stick with the Government we have because they have already started, or do we get fresh people in when we don’t have any evidence that their plans have been properly costed?

Kenny was in Cork last week to turn the sod on two major construction projects. He was met by water protesters, which put a dampener on a very exciting time for our city. But if people are not happy, they have a right to be heard.

Labour’s Kathleen Lynch is the strongest female candidate, and I think she’ll have my first vote. I’m very torn on my number two. I had thought I’d vote Fine Gael but when it comes to issues that are important to me, the Green Party do support food producers etc. They are now coming back into my head as to who to vote for if I can’t decide between the bigger parties.

Kate Lawlor was in conversation with Ciara Kennyas part of The Irish Times Meet the Voters series, profiling 10 sample voters in a bid to track the impact of the 2016 General Election campaign on their voting intentions. Follow them at irishtimes.com/election-2016/meet-the-voters