Shatter warns against rise of the extreme right in EU elections 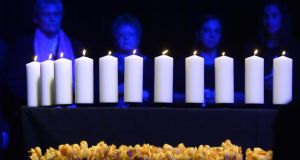 European leaders should be slow to support proposals for any part of the Middle East to be entirely “Juden Frei” – or “free of Jews” – as the key component of conflict resolution, Minister for Justice Alan Shatter has warned.

And he said he too had “personal experience of the racist and prejudiced online commentary which all too frequently results on occasions when I am personally in the public eye”.

‘No comfort’
At the ceremony in the Mansion House, the Minister said European nations “must give no comfort” to those who see Jews as legitimate targets because they are Jewish and to extremists “who would if they could bring about a second Holocaust by the extermination of six million Jews who today are citizens of the State of Israel”.

Speaking on the theme of Remembrance, Mr Shatter told some 600 people in attendance, that political leadership, including Ireland, turned its back on the Jews of Germany during the early years of Nazi repression.

‘Hitler almost succeeded’
“Hitler almost succeeded in his objective to make Europe ‘Juden Frei’. In today’s Europe, political leaders should be conscious of Europe’s history and past failures and be slow to endorse or advocate that any part of the Middle East be rendered entirely ‘Juden Frei’ as the primary focus of any conflict resolution process.” But many parts of the region were already tragically “Juden Frei”, he added.

He said the “unfolding evil of the Shoah [Holocaust] began not in the death camps but with anti-Semite hate speech”.

Holocaust survivor Jas Kaminski from Bilgoraj in Poland was sent to the death camp of Belzec but became separated from his family, became a child soldier in the Russian army and eventually arrived in Britain, before moving to Ireland after winning a scholarship to UCC. In the late 1950s he was granted Irish citizenship.

His daughter Jadzia Kaminska spoke for him at the ceremony, outlining how his entire family was wiped out in the Holocaust and no further trace has since been found of them.

Survivor Tomi Reichental spoke of the horrors of Bergen- Belsen concentration camp where he was sent aged nine, losing 35 family members to the Holocaust.

Director of the European Parliament office in Dublin Francis Jacobs said the Holocaust was part of Europe’s psyche. Israeli ambassador to Ireland Boaz Moda’i quoted writer Elie Wiesel that “not all victims were Jews, but all Jews were victims”.

Ireland has marked the Holocaust with an annual memorial ceremony since 2003. Master of ceremonies Yanky Fachler said Ireland was outside the Holocaust experience of its European neighbours “but we still have dark ties” to it.