Promises made on reforming State board process 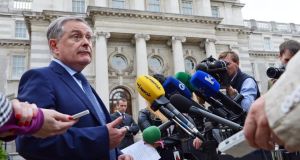 Ministers will have to choose all State board appointments from a shortlist provided to them by the public appointments service under new measures agreed by the Government.

Minister for Public Expenditure and Reform Brendan Howlin announced a revised system for filling vacancies on boards yesterday, with all appointments now going through a dedicated website.

The move comes in the wake of the controversy over John McNulty’s appointment to the Irish Museum of Modern Art.

Promises have been made before. Before the 2011 general election, both Fine Gael and Labour promised to reform the opacity surrounding State board appointments and the allegations of political cronyism.

The election of 2011 was no exception. Fianna Fáil filled some 60 vacancies on boards of State companies and institutions with people many of whom had clear links with the party.

In 2009, Fine Gael introduced Private Members’ legislation aimed at eradicating cronyism. Leo Varadkar, then in opposition, introduced the Public Accountability Transparency Bill, which was designed to hold ministers to account for the 6,000 people appointed to State board positions. The Bill was defeated by the then Fianna Fáil-led government.

Varadkar wanted to make the process more transparent. But, interestingly, he also strongly defended political appointments on the following (strong) grounds: “People should be rewarded for participating in the political process and it would be wrong to place a cordon sanitaire around them to exclude them,” he said.

Fine Gael later went further, saying it would require all board members to resign and reapply for their positions. There was similar language from Labour. But once in Government, this, like many aspirations, was severely watered down. So much so that it didn’t even feature in the language of the programme for government.

In addition, Varadkar wrote to six directors of boards associated with the Department of Transport asking them to step down. All had been appointed by the former government and all had Fianna Fáil connections, including former TD Marian McGennis and a former candidate, Luke Moriarty.

Despite the promises to reform the system, only about 20 per cent of the 1,200 or so State board vacancies that have been filled in the Government’s period in office have gone through the public process. Ministers are still making private choices in the vast majority of cases.