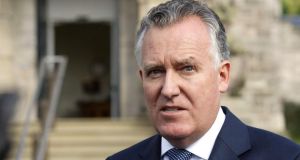 Northern Ireland’s politicians have not displayed the will to deal with the legacy left by the Troubles, former Labour Northern Ireland secretary of state, Peter Hain has declared. File photograph: Paul Faith/PA.

Northern Ireland’s politicians have not displayed the will to deal with the legacy left by the Troubles, former Labour Northern Ireland secretary of state, Peter Hain has declared, leaving NI “nowhere near reconciliation”.

Speaking at a Sinn Féin-organised gathering in the House of Commons in London, Mr Hain said that demands for criminal investigations of decades-old murders will not deliver for 95 per cent of victims’ families: “(It’s) simply too old and the evidence isn’t there,” he declared.

Unionists had understandable concerns that investigations into the past could “be one-sided with a focus on the state telling the truth about its role and admitting wrong doing but the paramilitaries not as forthcoming”.

The difficulties were illustrated by Sinn Féin’s Gerry Adams’ declaration that the murder of Belfast widow, Jean McConville was one “of these things (that) happen in war”, while he simultaneously pressed for a public inquiry into the Ballymurphy massacre in West Belfast in 1971.

However, Mr Hain said the arrest last year by the Police Service of Northern Ireland (PSNI) of Mr Adams, who he described “as one of the architects of the peace process”, was “not only ludicrous, but also dangerous”.

Saying that he was trying to be frank, not hurtful, Mr Hain said he understood why victims and victims’ families want the past investigated: “I understand why victims want it, but it isn’t going to lead to what they want”.

Criticising NI’s politicians, Mr Hain said “nearly every initiative” to deal with the legacy left by the Troubles since the Good Friday Agreement has come from the British Government, supported by the Irish Government.

The latest round of cuts announced by Mr Osborne will remove a further £800m from the Northern Irish economy: “(NI) is weak to withstand that type of austerity tsunami. It is no accident that sectarian has increased.”

“The absence of war however is not in itself enough. The time has come for us all to develop reconciliation, promote healing and to embrace forgiveness. That is a challenge which will be both difficult and painful, because uncomfortable compromises inevitably need to be considered,” said Mr Kearney.

“Too many families from all sides, across Ireland and Britain live with real and continuing pain. I am sorry that cannot be undone,” he said, echoing Queen Elizabeth’s 2011 words by adding: “No reasonable person could disagree that there are many things which we wish had been done differently or not at all.”

In his contribution, Lord Alderdice, who paid tribute to Mr Kearney’s “very genuine and long-standing initiative”, said “each attempt at a political development in NI” since the Good Friday Agreement “has been less effective” because the underlying attitudes of people have not changed.

Too many Unionists hold onto the old language of dominance, while too many nationalists hold onto the rhetoric of victimhood even though “the reality has changed politically, legally and, increasingly, economically”.

Urging NI politicians opposed to budget cuts to understand the nature of Westminster political opinion, Lord Alderdice said that there “no sympathy here to pay more for NI. It is not going to happen.”

1 Coronavirus: Non-essential travel from US set to be banned within days
2 Covid-19 incidence in the Republic set to surpass that of UK
3 ‘Our hearts are broken’ – implications of fresh lockdown sink in
4 Taoiseach tested twice for Covid-19 but excused quarantine after Brussels trip
5 New call centre at Dublin Airport to track arriving passengers
Real news has value SUBSCRIBE