Parties divided in their response to Brussels ruling on Apple 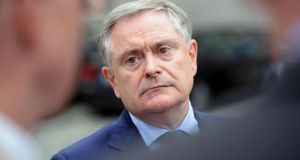 There were sharp divisions between the two main Opposition parties over the European Commission’s ruling that Apple had an illegal arrangement with authorities here and must pay €13 billion in back taxes.

Sinn Féin called for a public inquiry into what its finance spokesman Pearse Doherty portrayed as the “greatest tax avoidance scheme in Irish history”.

In contrast, Fianna Fáil accepted the €13 billion figure was a “bombshell” but indicated a degree of support for the Government’s decision to appeal the ruling.

Mr Doherty argued the Government should “reach out” and collect the €13 billion as soon as possible.

“There is also an irony when we see an Irish Government challenging the EU Commission over this while we have memories of how they bowed down to the same commission during the period of austerity,” he said.

He said the net effect was that Apple paid an effective tax rate of 0.05 per cent on its global profits.

Fianna Fáil finance spokesman Michael McGrath said the commission’s ruling did leave “some fundamental questions unanswered” and also confirmed Fianna Fáil will engage with the Government on this issue.

He also said another major question surrounded the European Commission’s view that Ireland was solely responsible for collecting tax on 60 per cent of Apple’s world-wide profits for a decade.

Labour leader Brendan Howlin, pictured, also supported a Government appeal. He said that with €13 billion of corporate revenue at stake, his party would support it so that this matter could be determined by the European Court of Justice.

People Before Profit TD Richard Boyd Barrett said the entire political establishment colluded with Apple in an act of “economic treason”. He said it had robbed the public of billions of “desperately needed cash for public housing”.

Catherine Murphy of the Social Democrats said the ruling highlighted the “double standards” where small firms struggled while a giant multinational paid the bare minimum of tax. She said it would be “intolerable” for the State to challenge the ruling.

The Green Party also said the “incredibly thorough” ruling should not be appealed.