Businessman Donald Trump has been condemned by both Republicans and Democrats for his call to ban Muslim immigrants to the United States. Video: REUTERS 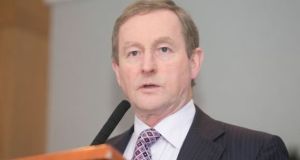 Speaking in the Dáil on Wednesday, Mr Kenny said “comments made in the United States are not acceptable to me or to people in this country. Free speech is one thing. The comments made are unacceptable.”

He was responding to Fianna Fáil leader Micheál Martin, who described Mr Trump’s comments as incitement to hatred.

Mr Martin said it was important that the Government respond forcefully to the Republican party and to Mr Trump “that it’s something we wouldn’t tolerate in our democracy”.

He said the remarks merited a Government response to Mr Trump and the Republicans.

The US businessman has called for a “total and complete shutdown of Muslims entering the United States until our country’s representatives can figure out what is going on”.

He was responding to the shooting dead of 14 people in California by a US-born man and his Pakistani wife.

Mr O’Callaghan said: “The recent comments of Mr Donald Trump, where he effectively condemned an entire religion, are outrageous, dangerous and must be condemned without equivocation.

“Eyebrows were raised by many at the enthusiasm of our Finance Minister’s praise for Mr Trump when he decided to invest in Doonbeg County Clare.

“Lest that praise now be misinterpreted by anyone as support for Mr Trump’s views, especially among our own Muslim communities, the Government should move quickly to make clear Ireland’s rejection of this sort of sectarian rhetoric.”