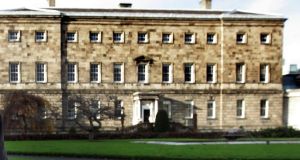 The work on the Seanad has been promised since 2008 and is due to health-and-safety fears in line with the building’s age: Leinster House was built in 1745. Photograph: Eric Luke

A Minister of State has questioned a plan to temporarily move the Seanad to the National Museum in Dublin at a cost of €1.7 million, saying “we cannot spend that kind of money”.

Seán Canney, who has responsibility for the Office of Public Works (OPW), said alternative sites should be examined to accommodate the Upper House while renovations are carried out on its Leinster House home.

The works are due to begin at Christmas and expected to take between 18 months and two years.

The Houses of the Oireachtas Commission was this week told the bill for moving to the museum’s “ceramics room” during that time would be some €1.7 million.

Mr Canney told The Irish Times the commission should reconsider the proposal. “We cannot spend that kind of money,” he said.

“To spend €1.7 million to relocate 60 people for two years is an extraordinary large sum of money. Now the commission has the full cost, we have to reconsider whether this is value for money and if there are other options.”

Several alternative venues were considered by the OPW and the nearby museum was eventually chosen. The majority of the costs involved in the move will go on building a walkway between it and Leinster House, which is effectively next door. Money will also be needed to install microphones and voting equipment.

The commission was told drapes would be erected to cover the scaffolding during building work.

The work on the Seanad has been promised since 2008 and is due to health-and-safety fears in line with the building’s age: Leinster House was built in 1745.

Leinster Lawn – on the Merrion Square side – is also to be refurbished “in a manner that takes into account its historic evolution from private residence to public parliament”.

A Houses of the Oireachtas spokesman said the cost was the minimum required to maintain the level of service and access. He said the monies spent would also benefit the museum in the long-term.

A further €700,000 is being spent on improving technology in the Dáil chamber with a focus on microphones and the voting display system that allows members to officially record their abstention in a vote. It will also improve the broadcast quality, removing all interference by mobile devices.

This work will begin when the Dáil breaks on July 21st and finish on September 27th when it returns.

The final cost of the building work is not known. Officials have stressed the urgency and necessity for such construction.