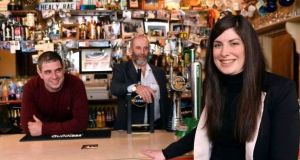 Maura Healy-Rae has been co-opted to take the council seat of her father Danny (centre) and join her brother Johnny (left) on Kerry County Council. Photograph: Don MacMonagle.

The eldest daughter of Independent TD Danny Healy-Rae has been co-opted on to Kerry County Council to fill the seat he vacated when elected to the Dáil.

Ms Healy-Rae’s appointment was proposed by her brother Johnny, who represents the South and West Kerry municipal district, and seconded by Independent Cllr Sam Locke.

“It used to be three Healy-Raes for the price one, now it is four,” Danny Healy-Rae told the meeting, in reference to Ms Healy-Rae and her councillor brother as well as himself and TD brother Michael.

Ms Healy’Rae’s late grandfather, Jackie Healy-Rae, once represented the Killarney area as a councillor before winning a Dáil seat.

In her first speech, Ms Healy-Rae said her grandfather’s legacy was “written all over this constituency” .

Her father Danny had been “the hardest working councillor to grace the chamber” and he would be a hard act to follow, she added.

Roads, health, social housing and education would be among her priorities for the next three years, she said, adding that roads in Kerry were “in a dreadful state” at a time of rising motor insurance premiums.

Danny Healy-Rae told the chamber the council had not seen the last of him and he would be fighting for more road workers for Kerry in the Dáil. “I will be knocking around . . . Ye haven’t got rid of me!”

He said he was “very proud of the people of Kerry” for electing him despite his late entry to the general election race and even though some in Dublin viewed his family and supporters as being “gombeens”.

John Lucid from Ballyheigue was co-opted to replace newly elected Fianna Fáil TD John Brassil in the Listowel municipal district. The 56-year-old retired accountant with the ESB is well known in hurling circles and has trained the senior hurling team in Ballyheigue.