Martin McGuinness says he has ‘lost a friend’ 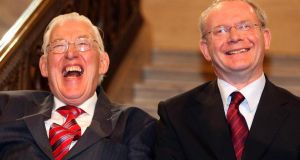 First Minister Ian Paisley and Deputy First Minister Martin McGuinness smile after being sworn in as ministers of the Northern Ireland Assembley, Stormont in May 2007. Photograph: Paul Faith/PA 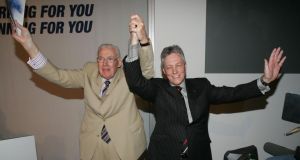 Ian Paisley and his successor Peter Robinson salute the crowd after Dr Paisley’s final address to a gathering of DUP members in Belfast to mark his retirement as leader of the party in may 2008. Photograph: Alan Betson/The Irish Times 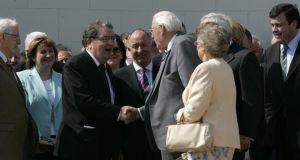 The late Ian Paisley and his wife Eileen meet former SDLP leader John Hume and then taoiseach Bertie Ahern and other political figures at the official opening of the Battle of the Boyne site, in Oldbridge, Co Louth, in May 2008. They cut the ribbon with original 17th century swords. Photograph: Dara Mac Dónaill/The Irish Times 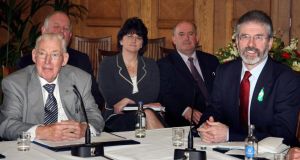 Democratic Unionist Party leader Ian Paisley (L) and Sinn Fein leader Gerry Adams speak to the media during a news conference at the Stormont parliament buildings in Northern Ireland March 26, 2007. Northern Ireland’s main Protestant and Catholic parties agreed on Monday to start sharing power on May 8 after their leaders put aside decades of hostility to hold a historic first meeting. Photograph: Paul Faith/PA

In a statement, he expressed “deep regret and sadness” at Dr Paisley’s death.

Mr McGuinness paid tribute to the work Dr Paisley did in the latter days of his political career.

“Over a number of decades we were political opponents and held very different views on many, many issues but the one thing we were absolutely united on was the principle that our people were better able to govern themselves than any British government,” he said.

“In the brief period that we worked together in the office of the First and Deputy First Minister I developed a close working relationship with him which developed into a friendship, which despite our many differences lasted beyond his term in office.”

Northern Ireland First Minister Peter Robinson has paid tribute to the late Rev Ian Paisley’s “massive contribution” to politics in the region, after his death today.

“Ian was one of the largest political figures in Northern Ireland, he made a massive contribution. He had a personality which we are hardly ever likely to see again,” Dr Paisley’s successor to the position told the BBC.

“We’ve just heard the news of the death of Ian Paisley and I’m sure there’ll be lots of time for political analysis of his career and his part in our history and his involvement over a very long time,” he said. “But I think now today it’s sufficient to recognise that this is a huge loss to his family even though he lived a very, very long life.”

Mr Adams said his thoughts today were with Dr Paisley’s wife Eileen, his children and his grandchildren. “So I would just like on my own behalf and on behalf of Sinn Féin to extend that sympathy and solidarity on a personal level to the Paisley family.

Very sad to learn that Ian Paisley has died.My deepest sympathy to his wife Eileen & family.Once political opponents - I have lost a friend.

Just heard of Ian Paisleys death. There will b lots of discussion of his role but on my behalf & SF Sympathy 2 Eileen & the Paisley family.

“I wish to express my sympathy to Baroness Paisley and her family on the passing of Dr Ian Paisley." —An Taoiseach http://t.co/o5l5whFyfz

“Martin McGuinness famously shared the office of Minister and Deputy First Minister with Ian for I think a year,” he added.

He also paid tribute to Dr Paisley in Irish. He was speaking at the final day of his party’s two-day think in in Termonfeckin, Co Louth.

Sinn Féin leader Gerry Adams TD also expressed shock and sadness at the death of the North’s former first minister. Speaking in Co Louth at the party think-in today he said: “There will be plenty of time for political analysis but at this point I wish to extend my deepest sympathies to Ian’s wife Eileen and to the Paisley family at this very sad time.”

First Minister Peter Robinson paid tribute to his former mentor, notwithstanding that in the latter stages of his life Dr Paisley became distanced from his deputy of many decades. Mr Robinson said he made a “massive contribution” to political life in Northern Ireland that culminated in the current Stormont administration.

“He had a personality which we are hardly ever likely to see again in Northern Ireland. Even those who thought the least of his politics thought the most of him as a person,” he told BBC Radio Ulster.

The veteran SDLP leader was at loggerheads with Mr Paisley for decades over Northern Ireland’s political future.

But Mr Hume recalled him as a man who was capable of great charm and remembered how, despite their differences, the pair worked together on economic issues.

He said Mr Paisley had eventually embraced the politics of compromise, but he questioned if history might ask why he did not do it sooner.

“I knew Ian Paisley well throughout our many years in politics and we enjoyed a close working relationship in the European Parliament,” said Mr Hume.

“During this time Mr Paisley was a larger than life character in Irish politics and a dominant voice within unionism.

“While he was not always constructive, and often politically challenging, he could, on a personal level, be very charming.

“His overstated outbursts often overshadowed the understated constituency work he carried out for all the people of North Antrim whom he represented as an MP and MLA, and the tireless efforts he made on behalf of Northern Ireland as a member of the European Parliament.”

The former leader of the SDLP added: “However history will record his political career as a journey - one which took him from the politics of division to a place where he accepted agreement as a solution, the need for power-sharing, and respect for diversity.

“But history will also ask if he should have reached this point sooner.”

Mike Nesbitt, leader of the Ulster Unionist Party (UUP), said: “There will be plenty of time to reflect on Ian Paisley’s impact on the shaping of the modern Northern Ireland and its relations with our nearest neighbours, but today is a time to give the Paisley household space to mourn.

“My sympathies to Baroness Paisley and the family.”