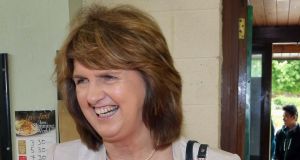 Ireland has become a “rainbow nation” of inclusion and diversity with the expected Yes vote in the gay marriage referendum, Tánaiste Joan Burton has said.

She was “delighted” at what she believed would be an “overwhelming majority” of the electorate supporting the referendum on gay marriage. And Ireland was now offering a “céad mile fáilte” to people who are gay and lesbian.

Ms Burton said the result “makes a very clear statement about Ireland, that we are a country of inclusion, a country of diversity, a rainbow nation where we are welcoming to everybody and inclusive of everybody”.

She thanked everyone who came out and campaigned.

“I want to thank everybody who voted, whether they voted Yes, which obviously what I wanted them to do, and the people who voted No because this is a powerful exercise in democracy.

“The people went out and made this constitutional change possible. Céad mile fáilte is Ireland’s most known welcome, so it’s now cead mile failte to people who are gay and lesbian to be in Ireland.”

She said the Labour party had been involved in a campaign around equality for people who are gay and lesbian for 30 years.

“I was a member of the Dáil and the government when we voted to decriminalise homosexuality. We strongly supported civil partnerships and I’m so glad now today that the people have actually individually and collectively voted for marriage equality.

“I want to thank all the young people. They brought an incredible amount of energy and vibrancy to the campaign – Yes Equality, Glen (Gay and Lesbian Equality Network), Marriage Equality – all of the different groups who have been campaigning down through the years.

“There’s been quite a few tears, I would say, shed already that we passed a moment and have taken a step to make ourselves this inclusive nation.”