Coalition pledges to press on with reform agenda 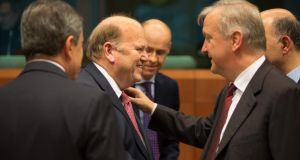 The Government is making plans to press ahead quickly with a swathe of unfinished troika reforms as the State exits the bailout next month without the benefit of an emergency credit line from Europe and the IMF.

As the three-year rescue programme draws to a close, the immediate focus will be on a long-delayed overhaul of the legal profession and preparations to charge domestic users for water in 2015.

By stepping up these initiatives even as the troika leaves Ireland, the Coalition aims to demonstrate to investors that it retains an appetite for difficult policies to fan the nascent recovery. This is in addition to its determination to comply with demanding fiscal targets it must meet under tough new EU laws to enforce budgetary discipline.

The move to proceed with a “clean break” from the bailout was unveiled to the Dáil by Taoiseach Enda Kenny after a special Cabinet meeting. The response on the markets was muted but Irish 10-year borrowing costs declined a little.

The manoeuvre followed extensive consultations with Germany and other euro zone powers, the three troika institutions, major international credit rating agencies and bond market participants in the City of London.

“Like most other sovereign euro zone countries, from 2014 we will be in a position to fund ourselves normally on the markets,” Mr Kenny told the Dáil.

“Neither today’s decision, nor the exit from the bailout in December, means the end of difficult economic decisions . . . Nobody should doubt the Government’s commitment to finish the job we started when we took office.”

Fianna Fáil’s response was to say it would have been “sensible and prudent” to seek a line of credit.

The Cabinet was briefed at its meeting by Central Bank governor Patrick Honohan and National Treasury Management Agency chief John Corrigan, who spoke of favourable comment from credit rating agencies about the exit plan.

Smooth exit
Irish officials had concluded there was no imminent or obvious threat to the prospects of a smooth exit. “There was nothing on the horizon that we saw,” said a senior Government source.

With borrowing costs at their lowest level for years, the Coalition became increasingly convinced that it would be better to go it alone on debt markets than to wait until any credit line expired next year.

The final decision was made yesterday so Mr Noonan could speak directly afterwards with his euro zone counterparts in Brussels at scheduled talks.

“We spent an awful lot of time getting our freedom and getting the authority to run our own affairs, and there’s not much point in having political freedom if you do not have economic and financial freedom,” the Minister told reporters.

Róisín Ingle: It was my sister who dropped me off at that London clinic. Thank you, Rach