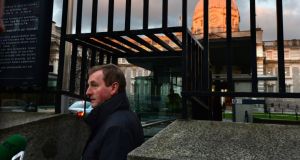 Enda Kenny will ask Minister for Justice Frances Fitzgerald to meet her Northern counterpart to discuss how a cross-Border inquiry might be carried out.

The Taoiseach welcomed moves by senior Sinn Féin figures to co-ordinate the handover of names to gardaí of well-known republicans suspected of rapes and other sexual assaults.

Alleged rapists were moved from Northern Ireland “based on the best information that we have”, Mr Kenny said.

“People who were in the IRA or who are since associated with the Sinn Féin party have a duty and responsibility to give that information to the authorities,” the Taoiseach said. “So I welcome any move in that regard.”

Speaking on his way into the Cabinet meeting he said: “I’m going to ask the Minister for Justice to have a formal meeting with her counterpart, Minister [David] Ford in Northern Ireland.”

Mr Kenny added the issue of how the dual system deals with compellability of attendance for sexual abusers needs to be examined.

“This is a matter about which there can be no equivocation. So I’m going to look at the question of how that might actually apply.”

The Taoiseach said the possibility of children being put at risk from alleged sexual abusers could not be tolerated. “We need to know who they are, where they were moved to, what their movements have been.”

The people he referred to had not appeared on the court lists in the Republic or Northern Ireland, Mr Kenny said.