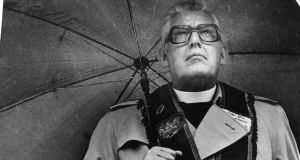 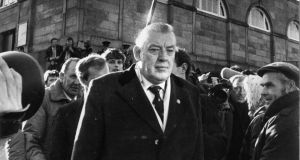 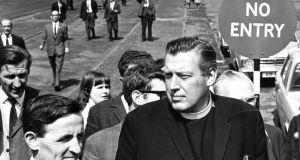 The Rev Ian Paisley arriving at Stormont in 1969 to protest to the Minister of Home Affairs against the disarming of the Special Constabulary. Photograph: Jimmy McCormack/THE IRISH TIMES 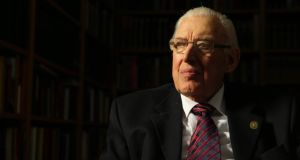 The former Northern Ireland First Minister and DUP leader and moderator of the Free Presbyterian Church who had been in frail health in recent months today passed away aged 88.

Dr Paisley, who for most of his career opposed attempts to create a powersharing administration between unionists and nationalists, concluded his political career with an historic agreement with Sinn Féin’s Gerry Adams and Martin McGuinness.

“My beloved husband, Ian, entered his eternal rest this morning,” Baroness Paisley said in a statement this morning.

“Although ours is the grand hope of reunion, naturally as a family we are heartbroken,” she said. “We loved him and he adored us, and our earthly lives are forever changed.”

First Minister Peter Robinson today paid tribute to his former mentor, notwithstanding that in the latter stages of his life Dr Paisley became distanced from his deputy of many decades. Mr Robinson said he made a “massive contribution” to political life in Northern Ireland that culminated in the current Stormont administration.

“He had a personality which we are hardly ever likely to see again in Northern Ireland. Even those who thought the least of his politics thought the most of him as a person,” he told BBC Radio Ulster.

Throughout his political life Dr Paisley - who was MP for North Antrim - had successfully blocked efforts to create a political settlement in Northern Ireland. But in the end, to the astonishment of many, he entered into the Northern Executive as First Minister with former IRA leader Martin McGuiness as the Sinn Féin Deputy First Minister.

Mr McGuinness was one of the first of many politicians to pay tribute to Dr Paisley today. He said he learned of his death “with deep regret and sadness”.

“I learned with deep regret and sadness of the death of former First Minister the Rev Dr Ian Paisley,” said Mr McGuinness.

“Over a number of decades we were political opponents and held very different views on many, many issues but the one thing we were absolutely united on was the principle that our people were better able to govern themselves than any British government.

“I want to pay tribute to and comment on the work he did in the latter days of his political life in building agreement and leading unionism into a new accommodation with republicans and nationalists,” he added.

Baroness Paisley said that in accordance with his wishes, “his funeral will be private and attended only by the immediate family, as will be his burial”.

“As a family we appreciate that there will be an expectation by those who admired him to express their gratitude for his life and their sorrow at his passing. To that end we will in due course publish details of a public memorial service which, will be scheduled later in the year,” she added. “There will be no further comment or statements made by me or the family at this time.”

Dr Paisley was probably the most fiery, uncompromising and bellicose Ulster politician throughout the Troubles.

But late in life, one of the most turbulent figures in Northern Ireland politics throughout the 20th century underwent a transformation.

The man who constantly declared “No surrender” to Republican views, suddenly agreed to share power in a Northern Ireland Assembly with his arch enemies in Sinn Féin, and hold the top political office alongside former IRA commander Martin McGuinness. Their apparently relaxed relationship even earned them the nickname “The Chuckle Brothers”.

Dr Paisley was a towering figure on the Northern Ireland political stage. He was the ultimate Orangeman, denounced by his many political enemies — including the Ulster Unionist Party - as a stubborn trouble-maker, who would exploit any situation or development which he feared was leading to unification with the Republic of Ireland.

But Dr Paisley would argue that he was merely defending the right of the majority of people in Northern Ireland to remain within the United Kingdom.

Dr Paisley, whose constant watchword was “No surrender”, delivered in a booming, thunderous voice, seemed to be opposed to every move introduced by the British government in London to try to bring peace to the war-weary province.

Ian Richard Kyle Paisley was born on April 6th, 1926, the son of a Baptist minister. He gave his first sermon at the age of 16. He was ordained in 1946 and was Moderator of the Free Presbyterian Church of Ulster in 1951. From the early 1960s, Dr Paisley became little short of a colossus in Northern Ireland political affairs.

He is survived by his wife Eileen, whom he married in 1956. They have two sons - Ian Jnr holds his father’s former Westminster seat, while Kyle is a minister in his father’s church — and three daughters, Rhonda, Sharon and Cherith.