Carnival atmosphere at Dublin Castle ahead of referendum result

Panti Bliss arrived at Dublin Castle to hundreds of jubiliant yes supporters. As a long time same-sex marriage campaigner she spoke about what today means for the LGBT community in Ireland. 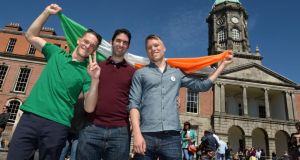 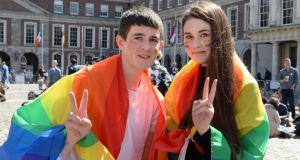 Erin Mac an tSaoir, Eastwall and Amber O’Shea, join supporters gathering in the yard at Dublin Castle, the Central Results Centre, for the referendums on same-sex marriage and the presidential age of eligibility. Photograph: Dara Mac Dónaill/The Irish Times 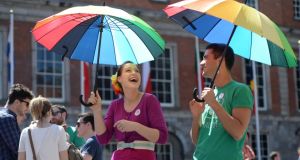 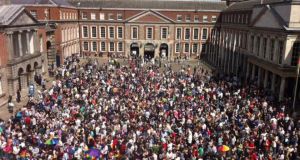 An aerial shot of people celebrating in Dublin Castle where results in the same sex marriage referendum are being collated. Photograph: Will Derham via Twitter

A steady steam of people began arriving at Dublin Castle from mid-morning, bearing picnics, pizza and rainbow flags. Hundreds gathered in the upper yard to watch the results unfolding on a big screen.

She was involved in the Love Choir which sang on O’Connell Street during the campaign. “First I was hoping it would pass, but then you want it to pass overwhelmingly so it’s something that’s not just tolerated. It’s celebrated. Today is a celebration,” she said and launched into an impromptu rendition of Oh Happy Day.

Senator David Norris was mobbed from all sides when he arrived in the yard. The gay rights campaigner declared it to be an absolutely marvellous day. “I’d like to thank all the people who came back from abroad to vote yes, straight and gay. And I’d like to remember, on this day, all the people I knew over the last 40 years who sadly took their own lives ,” he said. “Today, wherever they are, they are rejoicing.”

Jay Lassiter came from the US on Monday to support the Yes campaign with friends Trevor Powell and John Keating. He went straight from the airport to the city centre to start handing out leaflets before he went canvassing in Ballyfermot. “What better way to have a meaningful vacation? It’s been an immense blessing in breathe in this atmosphere,” he said.

“I’m a gay Irish-Catholic American and I’m here to bear witness to history and to show that the people from whom I descend are leading the way socially. I think that Europe and the rest of the world needs to wake up and realise where social liberalism is really happening. Look at the smoking ban and now this. It seems like if it can happen here, the argument against it anywhere is severely undermined.”

But he warned equality campaigners that there would be a backlash. “The last kicks of the dying mule are the meanest and the hardest. Just when we thought we were getting progress by electing a black man in the United States of America, all of a sudden it gave licence to all these crazy racists to go on Twitter and say “I hate niggers”. They feel like it’s okay in polite company to do that. There are a lot of people who did not vote for this and this is going to hurt them.”

Student Anne-Marie Meenagh was draped in a rainbow flag and had the rainbow colours on her cheeks. “I’m really emotional.I was crying on bus as I watched the news come in on Twitter,” she said. Her friend Emma Banks had joined her with her mother Imelda. “I’m delighted for them,” said Imelda. “They’re entitled to marriage, the same as everybody else. Emma’s friend flew back from China just to vote. €2,000 it cost,” she said.

Raymond Braun flew from from the US to witness the result. “It’s such a historic moment, not just for Ireland but for the entire world,” he said. “I’m from Ohio, one of the 13 states in the US where marriage equality is not yet legal. We’re waiting on the US Supreme Court decision which will be released in mid to end June and that has the potential to determine whether same-sex couples have the constitutional right to get married in the entire country so Ireland is giving us hope that the same will happen to us in a couple of weeks.”

Hannah Byrne, who was wearing a purple “Yes” t-shirt, came in to Dublin Castle so that she could be a part of history. “I didn’t want to be sitting by myself at home watching it on the telly,” she said. “I wanted to be somewhere and I wanted to be able to say in five years time that I was there when they announced the Yes vote.”