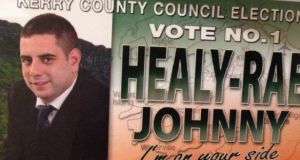 Johnny Healy-Rae has denied his family attend the funerals of people they do not know.

The Kerry county councillor was responding to criticism by Fianna Fáil councillor Michael Cahill, who said he had an issue with politicians, including the Healy-Raes, going to the funeral of someone they did not know as it was an insult to the deceased.

Johnny Healy-Rae, son of Independent Kerry TD Danny Healy-Rae, said it would be impossible for someone to ascertain the extent of who his family know, pointing to the number of people he, his sister Maura, his father, and his uncle - the Independent TD Michael Healy-Rae, have interacted with through their work.

Mr Cahill said his sister had received a “bereavement pack” from the Healy-Raes when her husband died recently. The packs include a poem, a Mass card and practical information such as details about funeral grants, pensions and other social welfare benefits.

Speaking on Radio Kerry, Johnny Healy-Rae said that while he does not send out funeral packages himself, he apologises to those who received the packages and did not want them.

He said that if he did not know the deceased personally, he and his family would know members of the deceased’s family.

Speaking to Radio Kerry earlier this week, Mr Cahill said , “Unless I know the deceased or a member of the grieving family, I won’t go [to the funeral]. It is despicable behaviour and actually an insult to the deceased and the family.”

Mr Cahill said the issue was not the number of funerals attended by the Healy-Raes but that they attended funerals where they were not known. He added the funeral packs were the subject of much discussion in Kerry.

Independent TD Michael Healy-Rae said neither he or his brother Danny attended funerals of strangers and defended sending out the funeral packs.

“The truth is I do know everyone whose funeral I attend . . . we do know the people,” he said.

Michael Healy-Rae added that he had lost four people, including his mother and father, in an eight-month period and had very much appreciated the boxes of Mass cards and letters he received and all those who attended the funerals.

On occasion, the TD brothers along with Johnny, have been known to attend a number of funerals in a day. Sometimes all three turn up at the same removal. The brothers left the general election count to attend one.

It is noted in Kerry that the Healy-Raes have a habit of signing a funeral visitors’ book in red or green ink.

The criticism by Fianna Fáil reflects the party’s decision to adopt a more robust approach to the Healy-Raes.

Recently, Cllr Maura Healy-Rae was denied the mayorality of Killarney with the help of Fianna Fáil. Ms Healy-Rae who was co-opted onto Kerry County Council after the election of her father Danny to Dáil had expected to assume the office of mayor in June as part of a pact entered into by Danny in 2014.